With the Great British Summer just around the corner, Birmingham is readying itself for the annual invasion of jazz bands and jazz fans from all over the UK and from abroad. 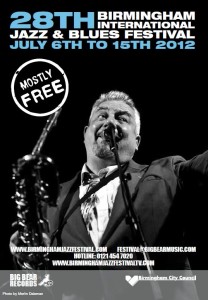 The 28th Birmingham International Jazz & Blues Festival takes place in 78 venues around the City and beyond for 10 days from July 6th to 15th.

UK bands and musicians will rub shoulders with 12 visiting combos from U.S.A., Italy, Poland, Hungary, Czech Republic, France, Germany and China, delivering a total of 180 performances – with over 90% of them free admission.

Jazz Sessions will take place on the city’s streets and squares, shopping centres, arcades, bars, hotels, restaurants, parks, music stores, museums, visitor attractions, on a canal boat and even in a zoo!

As well as the performances there will be sideshows including a Learn To Play Day in a city music store when aspirant musicians will be given the opportunity to enjoy free music lessons, musicians can join improvement sessions along with performance, masterclasses and workshops.

The history of Blues in Birmingham will be explored when The Blues returns to the legendary Henrys Blueshouse [birthplace of Black Sabbath] prefaced by a two-part Remembering Henry’s talk-in.

Birmingham’s Jitterbug revival will continue with free dance classes introducing the fun of The Charleston Stroll as well as flash dance appearances of the indefatigable Chinese Jitterbug Squad.

Youngsters will have the unusual opportunity to join Farmer Jason in a fascinating and fun introduction to American music. Musicologists should be fascinated to learn that the Farmer is actually Jason Ringenberg, he of The Scorchers fame, hit-making King of The Cowboy Punk. 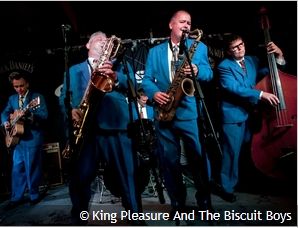 King Pleasure and the Biscuit Boys

The festival covers the entire spectrum of jazz and blues, and goes beyond to include Blue Beat, Rock Steady, Ska and Reggae – and even a star of Britain’s Got Talent. Look out for Island Delight: Rock Steady Jamaica with The Broombusters [featuring JALN Band star Charlie Wolfman Sylvester], The Peaky Blinders [with UB40 saxophone hero Brian Travers] and Musical Youth [hitmakers with ‘Pass The Dutchie’ – a four million seller worldwide]. Julian Smith, saxophone star of Britain’s Got Talent, makes an appearance with a performance at St. Pauls Church while globe-trotting Birmingham band King Pleasure & the Biscuit Boys will also appear at The Botanical Gardens.

Look into the programme’s small print and you will even find three festivals-within-a-festival: Brasshouse Beer Festival, Birmingham Chilli Festival in BrindleyPlace and Colmore Business Food Festival in Victoria Square.

In 2011, the Festival played to 96,000 people, a figure which the organisers intend to better this year. Festival Director Jim Simpson said “with a reputation that goes back nearly three decades, the Festival is established as a must-go event for residents and visitors alike who appreciate that this is the best free Jazz and Blues party in Europe. With the Festival’s hotels offering special Jazz Festival rates and an active working partnership with more than 80 local businesses and organisations plus the support of the City Council, this annual celebration of great music in the community is pretty much unique”.