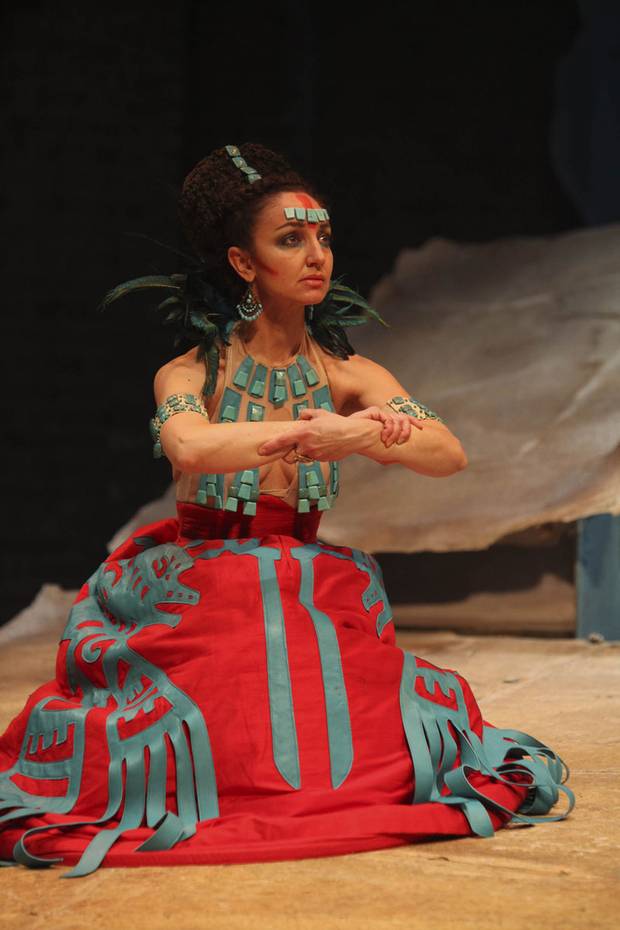 A Soldier In Every Son

It isn’t often that the star of a show is the costume designer.  But Eloise Kazan has fashioned beautiful outfits for  this play, set in late 14th century Mexico and chronicling the rise of the Aztec Empire.

Her work is magnificent: huge feathered headdresses, brilliant  turquoise outfits resplendent  with patterns of exotic birds, golden robes and armour patterned by geometric shapes and vivid colours. Plus there’s the  intricate tattooes that  embroider  the bodies of this large cast.

A Soldier in Every Son, by Luis Mario Moncada, loosely uses Shakespeare’s history plays to show how the smalltime Aztec tribe slowly rose to conquer and rule all its neighbouring city states. And with the deceit, the royal carousing, the bloody conflict and the hubris there are shades of Henry V, Richard III and the gaggle of strong armed henchmen that can raise or crush a Shakespearean king.

But, despite the translation, it is simply difficult to understand. Once you get past the visual feast of the costumes and the intriguing set design that uses light so well to display the arcane Aztec symbols that are used like a tapestry, the plot- the rise and falls of dynastic power- gets lost.

It is not only the relentless story of unknown family and tribal feuds. The names of people and places –so lost by history- are a lot to take in: Itzcoatl,  Texozomoc, Quimalpopoca.

And with lines such as:  ’Do you mean Chalco’s son, Prince Yacanex? Or Tlatelolco’s son Prince Zihuac?’, you can imagine the frustration of trying to follow just who  is who and where is where in this collaboration between the RSC and Mexico’s Compania Nacional de Teatro.

Even the playwright himself, Luis Moncada,  admits  in the programme: ‘The complexity of the Nahuatl language makes it hard even to remember the protagonists’ names.’

Well, if that is the case, shouldn’t the author, director  or translator do something about it? Otherwise we are lost.

And another pressing problem: when much of an audience sits down to a Shakespearean history play, they will usually have a simple grasp of what happened. Richard III was nasty; Henry V the great hero; and, Falstaff the man who put fun back into the early 1400’s.

But in this production, we have no idea of anyone. We are thrust into the cut and thrust of forgotten politics and warfare in the Valley of Mexico. It just doesn’t work.

But if the plot gets lost in the names and esoteria, the saving grace is what is in front of you: magnificent costumes and lighting by  backroom technical artists who give a great boost to this play.