The UK is fast becoming one of the heaviest countries in the world. With growing levels of obesity one of the most challenging health obstacles, creating a new culture of food and food production is one way of tackling the problem.

An exciting new project at Winterbourne House and Garden at the University of Birmingham is taking a serious look at the issues behind this health crisis. Urban Veg aims to promote a culture of urban food production as a means to address the impact that poor diet and obesity can have on social exclusion and public health.

Through short and in depth training courses, drop in sessions, demonstrations, all aimed at a broad mixture of people from all ages and backgrounds, Urban Veg will introduce concepts of conservation, sustainability and increased well-being, through outdoor activity and social interaction. The benefits of this project will stretch beyond health, with tips on how growing your own food can save you money in the long run.

Urban Veg began as a smaller project working with people from local Islamic communities in Winterbourne’s garden. It was immensely successful and the idea has grown. Now, rather than an emphasis on providing allotment or public growing spaces, the aim is to educate and raise awareness with a centre of excellence and an online library of resources. 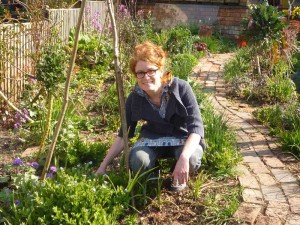 Alys Fowler in her garden

Championing the project is Urban Food journalist Alys Fowler. Alys’s enthusiasm for this subject knows no bounds and she brings to the table her own knowledge which she will share as one of the team of tutors. “Our cities need local, healthy food that will nourish both us and our environment. In some ways Urban Veg has a very simple concept; that of teaching people to grow good food, but it aims to be much more. The health of our cities depends on how we tackle these issues and I am very excited about this project’s potential. ”

Urban Veg will also be working with the University of Birmingham’s Centre for Obesity, local schools and community groups as well as NHS City Hospital’s Community Garden initiative.

The project will be officially launched in September 2012 as part of the Brum Dine with me EU Researchers day with a Harvest Festival of demonstrations and activities.