Local Celebrity ‘Blind Dave’ Heeley is to undertake yet another sporting Challenge – this time in honour of the Olympics and to inspire learners at Queen Alexandra College (QAC) where he is a Governor. 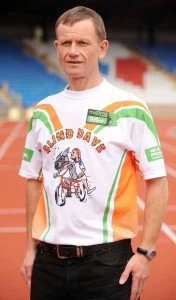 On Wednesday 23rd May, Dave will become the first person to attempt a sponsored Indoor Marathon Triathlon, where competitors will complete a 26 mile distance over three fitness disciplines – the treadmill, static bike and rowing machine. The challenge – to be held at QAC’s Feelgood Health and Fitness Centre – is that participants will reach an overall distance of at least 2012 miles collectively.

Sponsorship raised will go towards providing new sports facilities in the College and there will be prizes along the way, adding to the competitive element of the challenge.

Never one to say no to such a challenge, Dave is excited to be launching the event, saying ‘Queen Alexandra College is a fantastic place, supporting a lot of young people with disabilities. To play a part in such a challenge, particularly in an Olympic year, is an honour…. Although I’m not looking forward to the rowing machine!’

In 1996 Dave enrolled at Queen Alexandra College (QAC), a national College for people with disabilities, based in Harborne. He spent four years at the College, where he learned skills in Braille, ICT, carpentry and wood turning; something he continues to enjoy today in his workshop at home. In addition, his time at QAC helped him to further develop his confidence and independence.

In June, QAC will be hosting their own Summer Games and as a way to inspire students to take part, Dave will – whilst completing his marathon triathlon – also be chatting to them. Sarah Caldwell, Fundraising Co-ordinator says ‘Dave is such an inspirational person and we hope his taking part in this event will inspire others to take part and raise money for us.

Queen Alexandra College creates challenging learning opportunities for people with visual impairment and/or disabilities to realise their potential to work and to live independently.  As a charity, QAC relies on donations and events to help provide valuable resources for their learners. The Indoor Marathon Triathlon is one of many events organised to raise much needed funds.

You can read more about Blind Dave on his website here

And here’s an old video from his 2008 ‘7 marathons in 7 days on 7 continents’ achievement.