We all need a good laugh at the moment, don’t we? Leading local theatre company Lichfield Players promise you just that in their next play, Wedding of the Year by Norman Robbins, which takes to the stage later this month. 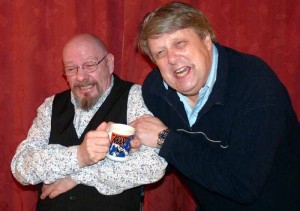 Steve Appleyard and Brian Asbury in Lichfield Players’ production of Wedding of the Year. For further

Alison Murchinson is … well, let’s just say she’s not the sort of girl you’d expect to be entered as a candidate in a Wedding of the Year competition. But that’s exactly what her Uncle Frank does, choosing a designer to create her wedding dress even before a suitable husband has been found. Then his eye falls on neighbour Walter Thornton’s son Melvyn, a frustrated (and incredibly clumsy) inventor. Add to the mix a nosy neighbour and some elderly aunts, and the scene is set. However, as they say, the best laid plans…

Players’ Chairman Andrew Bodger directs this, the final play of the company’s 2011-12 season, with a very experienced cast of Players “regulars”. Cast members report that they haven’t laughed so much for ages as they did at the first read-through – and you can join in the fun at the Lichfield Garrick Studio from Tuesday 22 to Saturday 26 May!

Tickets price £9.00 (some concessions are available) are now on sale at the Lichfield Garrick Box Office, telephone 01543 412121, or you can book online at www.lichfieldgarrick.com.