Folk-rock band Levellers release their tenth studio album, Static On The Airwaves, on 25 June 2012 through their own On The Fiddle Recordings. 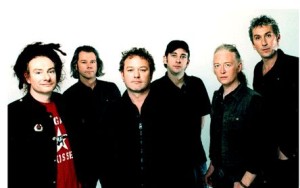 Already being heralded as their most accomplished album to date, Static On The Airwaves is the sound of a band whose incisive lyrics, innate musicality and passion have continued to improve rather than diminish in nearly a quarter of a century of writing, recording and performing.

In many ways Static On The Airwaves represents a coming of age for Levellers; it is unquestionably their most mature and considered release to date and is an album rich in reasoned clarity and insightful observance of the world in which we currently live.

Produced by Sean Lakeman, who is renowned for producing his brother’s Mercury-nominated and gold-selling albums as well as Letters From The Underground (Levellers’ previous album), Static On The Airwaves was recorded ‘as live’ at Sono Studios in Prague and mixed in New York by the legendary Victor Van Vugt (PJ Harvey, Beth Orton, Nick Cave).

Befitting the most actively militarised era in British society since WWII, Static On The Airwaves returns regularly to a universal theme of War and its impact in both a contemporary (‘Gunmen’) and historical (‘Mutiny’, ‘Raft Of Medusa’) context, with the closing track, a fabulous contemporisation of Black Watch Anthem, ‘The Recruiting Sergeant’, perfectly fusing the two.

From the frenetic energy of ‘Forgotten Towns’ to the melodic introspection of ‘After The Hurricane’ via the pop melodies of ‘Second Life’, musically, the album is the most diverse the band have recorded to date.