Direct from London’s West End, renowned actresses Anita Dobson and Greta Scacchi are making their way to Coventry’s Belgrade Theatre in Bette and Joan on the Main Stage from Mon 14 to Sat 19 May. 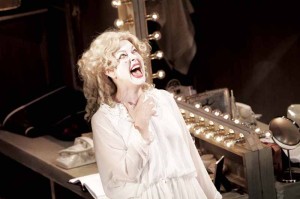 In this gripping play EastEnders and Strictly Come Dancing star Anita Dobson and Emmy Award-winning actress, Greta Scacchi will step into the shoes of legendary actresses Bette Davis and Joan Crawford as they perform together in the classic film Whatever Happened To Baby Jane?

The two actresses were famed for having one of the most bitter rivalries ever seen in Hollywood. Lasting more than thirty years, their taut and explosive relationship was never more evident than in the production of this 1962 classic film.

Set over the course of a single day, during the ‘Baby Jane’ shoot, Bette and Joan chronicles what happens to the two actresses as they prepare to face the cameras and, ultimately, each other and what goes on when the cameras stop. Part monologue, part dialogue, the audience sees the women at their most intimate as they dress, make up and discuss their lives, loves and losses, and of course, each other.

2012 marks the 50th anniversary of the psychological thriller Whatever Happened to Baby Jane?, which was produced and directed by Robert Aldrich. Nominated for five Academy Awards, the film is about the sibling rivalry that exists between Jane Hudson, a former child star, and her sister Blanche, a movie queen forced into retirement after a crippling accident.

The explosive nature of the film and the stories surrounding the making of it mean the film is now regarded as a cult masterpiece – one that continues to fascinate, not only for what went on in front of the camera, but also behind it.

Stage and television actress Anita Dobson is most widely known for playing Angie Watts in EastEnders and for her recent stint on ITV’s Strictly Come Dancing, where she lasted for nine weeks before being voted off. In 2003 she was nominated for a Laurence Olivier Award for Best Actress for her performance in Frozen at the National Theatre.

Hollywood actress Greta Scacchi has appeared in numerous films such as Robert Altman’s The Player, White Mischief and Presumed Innocent. In 1997 she won an Emmy Award for the television film, Rasputin: Dark Servant of Destiny.