Canadian singer songwriter Chuck Micallef will be bringing his own style of Country, Folk and Blues to Bloxwich in the West Midlands when he returns to play a gig in the town this weekend. 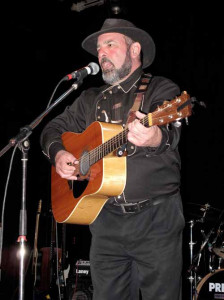 He is appearing at Bookmark Bloxwich Theatre with multi-instrumentalist Dave Luke and special guest Tony Barrettt on Saturday 2nd June.

And he is relishing his return to popular Elmore Row venue formerly know as Bloxwich Library Theatre.

“I am looking forward to getting back onstage at the Bookmark – It’s a great room with a fabulous atmosphere,” he said.

The singer started writing songs for his own enjoyment at an early age before venturing out on to the stage at Thistletown Collegiate’s annual Variety Night.

At that time he was based in Rexdale in Northwest Toronto but eventually he made his way down town getting exposure at such venues as the legendary Riverboat CoffeeHouse, The Backyard Café, The Backroom of Pizza Patio, and Free Times Café. He continued to perform at venues that presented acoustic-based Country, Folk and Blues music as he travelled across Canada to British Columbia.

In 1979 Chuck returned to Toronto and was accepted on to the Humber College Music Programme as a Vocal Major.  There he met Ron Dann (pedal steel player/arranger/producer) and 1983 saw the release of his first single Within You.  That first single was followed up by English Style Lovin’. His third release Loving You charted both in Canada and in the United States.

Stuart Williams of Bloxwich Library Forum, which manages the theatre in partnership with Bloxwich Library, said: “For the past 15 years Chuck has resided in the UK, becoming a regular at Country Music clubs and festivals throughout the country as well as at Bookmark Bloxwich.  He was even asked by writer/director Chris Cook to record Man of Constant Sorrow for the film soundtrack of The Penalty King, an independently produced British feature film.  Cook also picked up Chuck’s self-penned The Moon The Stars and The Sun for another scene in the film.

“Since Chuck first performed at our venue he’s become a great friend of the Forum, helping organise our Live Music Review, and we’re only too delighted to have him take centre stage once again.

“Chuck is also bringing two other talented performers, Dave Luke and Tony Barrett, so music lovers are assured of a great night out in Bloxwich this Saturday!”