A new family orientated camping festival – The Lunar Festival – has been announced. 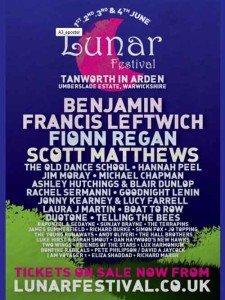 Brought to you by the same production team as the Moseley Folk Festival & Mostly Jazz, Funk & Soul Festival, the new four day event will take place in the beautiful setting of the Umberslade Estate in Tanworth In Arden on 1st – 4th June 2012.

Set in the spiritual home of Nick Drake, the intimate weekend of acoustic music will not only serve as a fitting tribute to England’s favourite Singer songwriter but also provide a fantastic weekend of entertainment in the build up the Queens Jubilee!

The four day event will kick off on Friday 1st June with an evening of music curated by Birmingham’s very own legendary label Static Caravan which will be exclusively available to weekend ticket holders!

Static Caravan have been credited with discovering some of the finest UK talent in recent years such as Beth Jeans Houghton, Erland & The Carnival, Tunng, & The Besnard Lakes. Static Caravan now release the work of Hannah Peel, Laura J Martin, Goodnight Lenin and Dan Haywood. All of which will appear over the course of the weekend!

The following three days (Saturday to Monday) will host three full days of music starting around midday until midnight!

Saturday – 2nd June 2012 – will be headlined by Scott Matthews who will be joined by Michael Chapman, Hannah Peel, Goodnight Lenin, Boat To Row, Joseph Topping, Andy Oliveri, The Terrapins, Richard Marsh & Ben Calvert with more to be announced.

There will be two stages at The Lunar Festival. The Northern Sky stage will act as the main stage whilst there will also be a smaller stage in the River Man Bar which will host the last and most liveliest act of the day to bring the festival crowd into the night.

Once the music has ended there will be film screenings and a mini rave on site to keep the party going into the early hours. There will also be a fire pit where musicians and campers can gather round to see the night out.

Birmingham’s very own Soul Food Project will be providing on site catering for the entire weekend, bringing their traditional dishes with Cancun twists to provide the attendees with a healthy option! They will also be joined by local caterers, Arden Pigs, who will be providing hog roast throughout the weekend.

There will be numerous other activities taking place over the weekend such as wood carving to help make the Lunar Festival a special experience for everyone!

Tickets are now on sale via www.moseleyfolk.co.uk and are priced at £65 for a weekend ticket and £25 for a day ticket. There are also some U16 options available.

Further information on all activities can be found at www.lunarfestival.co.uk

The full line up will be announced in the coming weeks.