Paul Samuels reviews a night at the Hare and Hounds in Kings Heath. 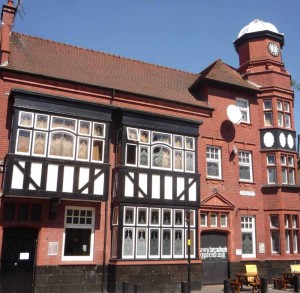 Pete Williams was the original bass player in Dexys (keen scholars of the inner sleeve will remember him as ”a young bass driver …carrying his tool under one arm and the complete Stax collection under the other”).  He was in post Dexys mutiny band The Bureau and These Tender Virtues, played on Dexys 2003 shows and is on the forthcoming Dexys album.  His own excellent album Seen is out and he’s assembled a
terrific band of Richard Hawley henchmen, all collapsing quiffs and manfully concealed bald patches.

Williams himself is a really engaging frontman, who can squeeze a tune out of most instruments, and carry off Pub Vegas style snappy pointing and on the beat gestures.  And you could fight World War 2 in his spiv trousers and braces set up ….not just wear them to fight in, but you could actually fit all the major campaigns into them….The Pacific… The Russian Front…The Y front..

Opening song Reconsider This is a Bowie quoting domestic violence song  (“bruises won’t show if she wears long sleeves”.  The chorus is a soaring thing of beauty that’s really lifted by the keyboards and as a chorus it goes above and beyond the call of duty.  It’s far better than any song actually needs….he could cut a bit of it off and give it to someone who needs it more.

He gets the uke out for Too Many Questions. It has a bit of a Van Morrison feel and Williams does have a bit of a Kevin Rowland turn of phrase, but the songs are strong and well arranged.  So they don’t just feel like it’s a rigid verse chorus structure but they progress through sections.

The line up is keyboards (Fred Skidmore, his long term musical partner), bass/double bass (Al Gare and a Paddington Bear hard stare from The Imelda May band), guitar and drums from Richard Hawley band and Paul Taylor on Trombone. They’re all excellent players, relaxed, unfussy but shit hot at the hot shit.

As clouds of over enthusiastic dry ice billows rounds the stage, Williams asks the trombonist (scientifically proven to be the parpiest of all musical instruments, although the Whoopee Cushion Orchestra of Great Britain may disagree) “is that you Paul?”

There’s a bit of a Latin feel to one of the songs that I couldn’t place and Black is as dramatic and murderous as a Spanish soap opera.  He says it was inspired by living and working in Santa Monica.

For the swing start of Soon I’ll Be There, Williams brandishes his clarinet with the ominous warning “The fun stops now….Here’s the misery stick”.  No need to worry though it’s a great song with heroic twangy guitar and trombone.

My favourite song though has the lines “I found myself alone in a brothel in Cologne on my 19th birthday …. I behaved quite badly as anybody might”. Part Jacques Brel, part Fast Show.  It’s not on the album though, so it looks like I’m going to have to see him again to hear it again.

The encore is the theme from The Cincinnati Kid. It’s a bit of a pointer to what the band are doing. Ambitious, cinematic, classily put together, reflective and comfortable looking backwards. And exactly what I want to be watching.