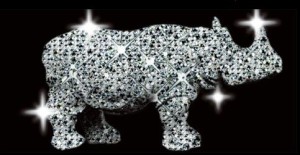 I was very interested to read the Birmingham Mail article on the proposed Gay Village ‘Rhino’ and the predictable negativity from the Taxpayers’ Alliance and others.

The gay community, with its now nationally famous Pride Festival, is an important part of the city’s alternative scene. The Rhino will definitely be a visitor attraction – therefore economically beneficial for the area – and help add to Birmingham’s street scene. Let’s face it, apart from the Jewellery Quarter, it’s currently not the most riveting, particularly when compared with other major European cities.

I believe that this investment from the city council should be applauded rather than derided. The relationship of a Rhino to the Gay Scene (Gay Rights), the Chinese Quarter (Rhino Horn) and the Jewellery Quarter (the Rhinestone Factor) all make sense and, as a bonus, it will be instantly recognisable and a talking point. It will certainly beat some of the brain deadening abstract architecture and art that we’ve had to suffer from the architectural and artistic pseuds who still continue to patronise the public.