LibDem Leader and Deputy Prime Minister, Nick Clegg, visited Birmingham Airport last week, to learn more about the planned runway extension and what it will mean for local businesses in the area. 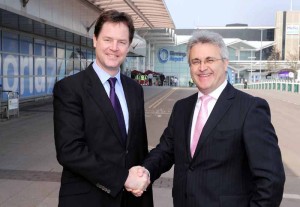 The Deputy Prime Minister was joined by the Liberal Democrat MP for Solihull, Lorely Burt and Birmingham Council Group Leader Paul Tilsley, for a whistle stop tour of the airport and a meeting with local business representatives.

The aim of the visit was to demonstrate the enormous potential Birmingham Airport has to grow in the immediate future, as well as the excellent facilities it already has available to passengers who fly from Birmingham.

The Deputy PM was on hand throughout the morning to listen to plans about the runway extension programme and the A45 Transport Corridor Improvement Scheme, learning more about how it will benefit passengers and local businesses not only in the local area, but also across the entire Midlands region.

Mr Clegg was also told how Birmingham Airport can double the amount of passengers which currently pass through the terminal each year to 18 million, and can climb even higher to 36 million using the existing runway.

It is hoped this visit will convince the Government that Birmingham Airport can provide a credible and immediate solution to the current aviation crunch, felt especially in the South East of the UK.

CEO of Birmingham Airport, Paul Kehoe, said: “We believe that Government should take a lead in examining what the long-term aviation solution for UK Plc actually is. This is an issue of economic development, and the outcome will have a significant impact on the nature and distribution of the UK economy for decades to come.

“For that reason, any longer-term thinking must draw in wider aspirations of Government. We believe it wholly inappropriate for the aviation industry to lead (or, indeed, disproportionately influence) this debate.”

Paul added: “If there were one thing to impress upon Mr Clegg, it is that Birmingham can deliver immediately, whatever the long-term solution. We would like to see this recognised as Government policy emerges. Britain’s long-term aviation problem requires courageous thinking. But make best use of underused assets, rather than simply adding to the imbalance that has taken place.”