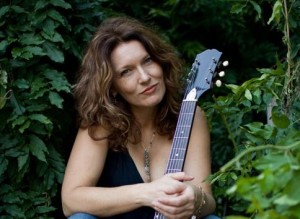 One great thing about music is that talent can be found anywhere. Whether it’s performing in front of thousands at a festival or a handful of customers in a bar, you never know when you’ll see a gig that will stop you in your tracks. At the Robin last night an appreciative audience witnessed one such occasion.

I’ve written about Lisa Mills before, and how her talent deserves a much wider audience. Armed with just an un-cooperative guitar, a bass player and a stunning voice, this lady provided another memorable night.

Lisa’s singing is phenomenal. Rarely do you get a vocalist who can belt out the blues with such power, then switch straight to a homespun country ballad; there’s obvious training there yet it all seems so utterly natural. She could easily be talked about in the same league as Aretha Franklin or Janis Joplin, whose music Lisa admirably interpreted during a spell with Big Brother & the Holding Company.  No sooner has this gig got underway, though, than there’s a problem with her guitar, which means we get two songs acapella. The first reduces the audience to awed silence, the more familiar Dock of the Bay has them singing along.

Back with the guitar and there are up-tempo numbers, slow blues, songs with a country edge. They all show off this vocal talent to its fullest. Lisa’s own Tempered in Fire could have been the high spot of the set but it was quickly matched by a rendition of the Ray Charles standard Unchain My Heart.  There’s another broken string, which leads to more unaccompanied singing, this time the Ella Fitzgerald classic At Last.

For most of the set Lisa performs alongside bass player and occasional guitar roadie Ian Jennings. They’ve been playing together for ten years, and their togetherness on stage makes a good partnership. He provides solid rhythm, steps up when the occasional solo is required and keeps the evening rolling nicely along.

They’re on stage for almost an hour and three quarters. That’s good going with a full band – for a singer with just one musician behind her it’s even more impressive. She’s shown that pure talent can enchant, entertain and overcome any difficulty. It was a very special night.