The Birmingham Green Restaurant Awards for 2012 have been launched.

Days after its growing foodie reputation saw the city named one of the New York Times’ places to go the 2012 Birmingham Green Restaurant awards have been launched at the home of last year’s overall winners, the Warehouse Café in Digbeth. 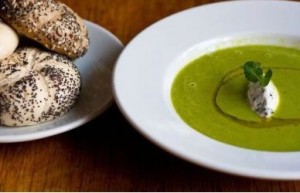 Speaking at the launch, cabinet member for transport, environment and regeneration Cllr Timothy Huxtable commented on the contrast between the Warehouse and the 2010 winner, the More Hall in Sutton Coldfield, using this as an example of the extraordinary depth of the city’s restaurant scene, ranging from Michelin-starred venues to its many ethic eateries and the successful Food Fest.

Cllr Huxtable also encouraged all the city’s restaurants to enter the competition and stressed the need for Birmingham to continue to grow its image as a food destination.

A spokeman for the city council later told us, “These awards are highly-prized amongst the city’s restaurants. Previous winners still boast of their achievements and they also play a great part in raising awareness of environmental issues. There’s a perception in some quarters that going green is expensive but that’s # not the case. It can often take very little effort to help the environment and also save money.”

There are five awards in all, in the categories of waste management, energy reduction, staff & community and purchasing, plus an overall winner. The closing date for entry is Friday 24th February and awards will be presented on Thursday 15th March, during Climate Week 2012.