Bookmark Theatre, part of the Bookmark Bloxwich library complex in Elmore Row, is ready to rock with another great night of live music as their 2012 gig season gets underway. 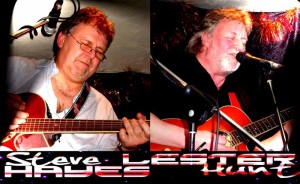 Latest act Steve Hayes and Lester Hunt, lined up to take to the Bookmark stage on Saturday 4th February, are amongst the finest musicians to fight their way out of middle England and become regulars on the international music scene.

Many people will know Steve as the lead singer/guitarist with the highly acclaimed Nearly Dan – Steely Dan tribute band.

Lester Hunt can be heard around the world whipping up a storm as lead guitarist with the famous Climax Blues Band.

Both are members of the legendary Barflys, well-known in Stoke and Newcastle-under-Lyme – and are set to take the Walsall music scene by storm.

Stuart Williams of Bloxwich Library Forum, which manages the theatre in partnership with Bloxwich Library, said “Hayes and Hunt are becoming well known around the UK for their acoustic set which includes songs from many musical genres. Featured writers and artists include Eric Clapton, BB King, Sting, Bob Dylan, The Beatles, Free, Hendrix, Bob Seeger, Paul Simon, Santana, John Martin, Gerry Rafferty, John Mayer and many many more. We’re really looking forward to bringing these guys to the Bookmark and hearing them raise the roof!”

Tickets for this show cost just £5 and are available now from Bloxwich Library in Elmore Row, Bloxwich.