Symphony Hall’s 21st anniversary festival begins this week, raising the roof with a visit from the Royal Opera and heralding seven months of festivities. 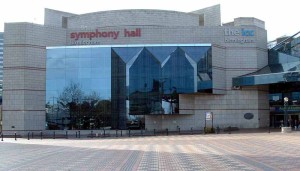 Elvis Costello, John Malkovich, The Wizard of Oz, Lord of the Dance, Billy Connolly, Jazz at Lincoln Center Orchestra and Sir Simon Rattle all appear during the festival with more to be announced.

Special events include world premieres, innovative projects, film screenings with live accompaniment, workshops and behind the scenes access.  Curious Sounds in Curious Spaces, an imaginative and adventurous family open day in partnership with Fierce Festival, will explore Symphony Hall, and 1000 children from 21 Birmingham schools will come together to Sing A Song For 21, in association with Ex Cathedra, filling Symphony Hall and the International Convention Centre (also celebrating its 21st anniversary) with music.

The festival opens on Wednesday 11th January with a rare and much-anticipated return visit from The Royal Opera and Antonio Pappano to perform Die Meistersinger.  This marks the first of four great Wagner operas to be heard during the Festival – a landmark mini-series for Birmingham.  ‘Wagnerfest’ then continues with Tristan und Isolde played by the City of Birmingham Symphony Orchestra with Andris Nelsons.  Parsifal is conducted by Valery Gergiev with the Chorus & Orchestra of the Mariinsky Theatre which, in August 1991 and then known as the Kirov, was the first opera company ever to appear in Symphony Hall.  Finally, Opera North, under the baton of Richard Farnes, performs Die Walküre, the second instalment in the company’s first Ring cycle.

A series of four special anniversary projects includes a centenary tribute to Captain Scott which combines Herbert Ponting’s evocative photographs of the ill-fated 1910 Antarctic expedition with Vaughan Williams’s Sinfonia Antartica and the world premiere of Seventy Degrees Below Zero by Cecilia McDowall, setting words from his final letter ‘To my widow’.  There are screenings of popular 1939 film The Wizard of Oz with live orchestral score played live by the BBC Symphony Orchestra and John Wilson. Original music by Philip Glass accompanies a screening of the 1931 film Dracula featuring Bela Lugosi in the title role.  The score, for keyboards and strings, will be played by Glass himself with the renowned Kronos Quartet. John Malkovich stars in The Infernal Comedy a stage play for baroque orchestra, singers and actor based on the chilling, true story of serial killer-turned-author, Jack Unterweger.

For families, there is a stimulating and imaginative free open day in partnership with Fierce Festival.  Curious Sounds in Curious Spaces is a journey around Symphony Hall for adventurous ears of all ages exploring sound and music-based performances, installations and interactive activities and workshops.  The day will see not just the hall and foyers, but staircases, backstage areas, reverberation chambers and other unusual spaces used for installations and performance. Local artists include Juneau Projects, 8bit Lounge and Soundkitchen. High-profile artists include Phil Minton and his Feral Choir and one of the launch performances of Mobile Sinfonia – a piece for an orchestra of mobile phones, performed by the public and conceived by Jem Finer.

Other highlights announced to date include two nights with the Billy Connolly and a return visit from comedian Sarah Millican.  There’s a rare appearance by revered Kashmiri-Indian pop-rock singer Kailash Kher.  For six nights in March, the feet and fiddles of the Irish spectacular Lord of the Dance will take over Symphony Hall’s stage, and there’s a visit from Elvis Costello, whose latest tour sees fortune in charge of the programme as the audience is invited to ‘spin the wheel’ to determine the next song.  In July, Wynton Marsalis and the Jazz at Lincoln Center Orchestra close the festival and celebrate the presence in Birmingham of the US Olympic track and field team.

In partnership with Ex Cathedra, Sing a Song for 21 will see 1000 children from 21 schools in Ladywood (the constituency in which Symphony Hall is based) and elsewhere in Birmingham participate in a major project designed to inspire and promote the joys of singing and create a legacy of singing in schools.  Following a series of in-school workshops, the project’s finale will be a promenade-style performance filling Symphony Hall and the Mall of the International Convention Centre (also celebrating its 21st anniversary) with music based on playground singing games.

The culmination of Symphony Hall’s 21st Anniversary Festival comes in June with a pair concerts by the CBSO and Chorus conducted by Andris Nelsons and Simon Halsey marking the official royal opening of the hall by HM The Queen on 12 June 1991. The concerts (on 12th & 13th June) include a centenary performance of Elgar’s The Music Makers – premiered in Birmingham’s Town Hall – and Ravel’s Daphnis and Chloé suite, performed at the very first Symphony Hall concert.  Bryn Terfel joins the orchestra for a selection of operatic arias.

Twenty one years after conducting the opening concerts of Symphony Hall, Sir Simon Rattle returns, this time with the Vienna Philharmonic, and City Organist Thomas Trotter gives a concert on the Symphony Organ, installed for the Hall’s 10th birthday in 2001 following a £1.5m fundraising appeal.