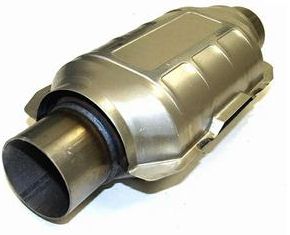 Schools and businesses across Dudley have been invited to attend a series of crime prevention sessions in a bid to put the brakes on the latest metal theft trend hitting the Black Country.

Cars, vans and minibuses have all been targeted by thieves who have stolen the catalytic converter, believed to have then been weighed in for scrap, from the vehicles. Since October 1st a total of 42 offences have been recorded in Dudley, with schools, garages, businesses and residents all being hit.

In a bid to tackle the issue Dudley’s local priorities team has arranged a series of sessions at the force garage in Brierley Hill during November and December, where vehicles can all be property marked. Once marked the parts can be individually identified should they be recovered from scrap dealers throughout the region.

PC Sean Lowe, from Brierley Hill police station, has organised the events. He said; “This specific kind of theft is proving to be a real issue across Dudley and it is important that all motorists and businesses who own high-clearance vehicles, like 4x4s or vans, are aware of how best to protect themselves from falling victim.

“West Midlands Police is already taking a number of actions to combat the theft of catalytic converters, including running overt and covert patrols, and working with local scrap yards and garages.

“We actively encourage owners of high clearance vehicles to get their catalytic converters security marked, as these are the type of vehicles that thieves are currently targeting across the county. ”

At the special marking days officers will security mark catalytic converters with a unique tracking number, using technology from Retainagroup. Once the mark has been applied, the unique code is recorded with the vehicle and owner details on the Retainagroup register, which can be verified immediately by the police. Funding for the property marking packs has been provided by Safe & Sound, Dudley’s Community Safety Partnership.

If you own a car or van with a high clearance, such as an Iveco Daily or a Mercedes Sprinter, please bring your vehicle to the Bevan Garage, Bevan Road, Brierley Hill, between 9am and 12pm on the following dates; Thursday 17th November 2011, Thursday 24th November 2011 and Thursday 1st December 2011, where you will be met by officers.

To have your vehicle security marked for free on these dates, ring PC Matt Nightingale or PC Sean Lowe, Dudley Local Priority Team on 0345 113 5000 ext 7902 6651 or e-mail [email protected] and book a place leaving name, contact number and a rough time you intend to arrive, as there are only a limited number of kits available.

Car owners can also put a sticker in the window of their vehicle, which should deter thieves by alerting them to the fact that their catalytic converter has a permanent security mark.  PC Lowe added: “Should you be unfortunate enough to suffer the theft of your catalytic converter, please ask the garage to allow you to retain the cut area of the exhaust when you are getting it replaced, as West Midlands Police may then be able to make a mechanical match on any recovered converter.”