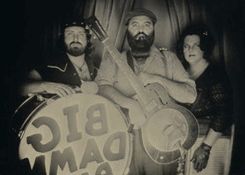 On Tuesday there’s a different-looking night in prospect with the arrival of the Reverend Payton’s Big Damned Band. This country-blues band from Indiana are touring to promote their latest album Peyton on Patton, a collection of songs from delta blues original Charley Patton.  Tickets £9.

Wednesday night has the return of psychedelic blues singer/guitarist Edgar Broughton to the Robin. Tickets £10.

Marc Bolan tribute T Rextasy are at the Robin on Saturday. Tickets £12.