The winner of a once in a lifetime music award will be decided by a public vote, during a prestigious music competition in the Midlands. 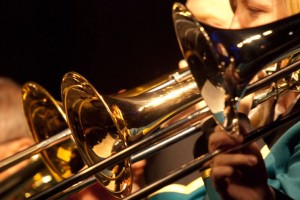 Music lovers throughout the region are being asked by the City of Birmingham Brass Band, to join them on their search for the next young star in the region.

Composers as young as 11, have written music for the 28 piece orchestra to perform.

The X-Factor style competition will see the young hopefuls being judged using an audience vote, after the budding composers hear their own music, performed by the City of Birmingham Brass Band.

The competition was launched in March this year and invited young composers aged 25 and under, to submit an original score, written for a 28 piece brass band.

Each composer who has entered the competition has rehearsed with the City of Birmingham Brass Band and provided tips on how they want their piece to be played.

“For me, the Young Composers Competition organised by the CBBB is a truly amazing opportunity,” says young composer Ed Mylechreest.

“It is such a great gift to have the musical idea you have created, actually played live in front of you – something that can be so hard for new composers to experience.

“This is a new and exciting competition, and one that should not be missed by brass band fans. Personally, I want to say thank you so much for this truly invaluable experience,” adds Ed Mylechreest.

Band Chairman, Liz Monk says, “We’ve been amazed by the excellent standard of the entries that we’ve had – even from composers as young as 11 and 14. We want to encourage young, local talent and help it to grow and develop, and this competition has been a fantastic way to achieve this.”

Composers will compete for two £300 prizes, one chosen by the audience and one by the judges. Composers will also receive a live recording of their piece being played.

The competition will be held at the Joseph Chamberlain Sixth Form College on October 29, with ticket prices starting from £7.

Tickets are available online at www.birminghambrass.co.uk or on arrival.