The Coventry International Prize for Peace and Reconciliation 2011 is being hosted by Coventry University. The award – designed by Coventry artist Rachel Sutton – will be presented to the winning organisation at a prestigious ceremony, attended by up to 500 dignitaries and members of the public, on Saturday 12 November 2011 at 4pm in the Goldstein Lecture Theatre (Alan Berry building). 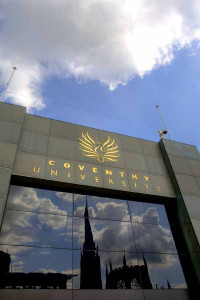 The peace prize is an annual accolade, first awarded in 2000, with a re-launch last year by a new partnership to commemorate the 70th anniversary of the Coventry blitz. The prize honours initiatives, organisations, individuals or projects that have made a commendable contribution in the areas of peace, reconciliation and campaigns for social and environmental wellbeing. It aims to highlight those whose work acts as an inspiration and a model for others.

Alan Hunter, Professor at the University’s Centre for Peace and Reconciliation Studies, said: “Following the devastation of the city by more than 4,000 German firebombs, on the night of 14 November 1940, Coventry’s global reputation as a city dedicated to reconciliation and peace has grown; being twinned with other ‘martyred’ cities throughout the world. In the light of this history and mission, Coventry University is committed to the advancement of international understanding.

This year two organisations have been shortlisted:

RTC is an independent peace-building organisation based in Birmingham, which has worked since 1991 to support people and organisations in transforming violent conflict and building lasting peace. The services they provide include training in conflict transformation, project planning and design, conflict sensitivity and resource mobilisation.

The Foundation builds bridges between Western and Eastern Europe and promotes dialogue between generations. Located at a special conference centre in the picturesque village of Krzyżowa in Poland, the Foundation brings together people from many nations, so that they may talk and share their views of the world.

The judging panel, comprising the Lord Mayor, the Bishop of Coventry, the Dean of Coventry Cathedral, and the Vice-Chancellor of Coventry University, will reveal the winner at the start of the Coventry Peace Festival (Saturday 5 November 2011). A press notice will be issued detailing the winner.

Dean of Coventry, the Very Reverend John Irvine said: “Those shortlisted have made a demonstrable and practical improvement to the wellbeing of communities, especially in conflict and post conflict situations. Both also value their connection with Coventry and Warwickshire. Responding to Conflict is linked to the Peace and Reconciliation Centre at Coventry University, and the Krzyżowa Foundation for Mutual Understanding in Europe is the first Polish institution to be presented with the Cross of Nails by the International Community based at the Cathedral.”

Lord Mayor, Councillor Keiran Mulhall said: “This has become a significant international award that recognises ordinary people doing extraordinary things to bring change to their communities, which have been affected by conflict.”

The Coventry International Prize for Peace and Reconciliation is based on a partnership between the Diocese of Coventry, Coventry Cathedral, the City of Coventry (Office of the Lord Mayor), and Coventry University.