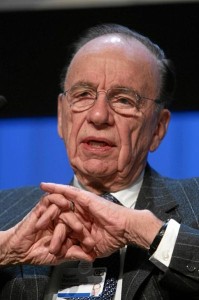 He talks to Howard

Howard Elston, our top reporter who helped shut down the News of the World, has this EXCLUSIVE interview with Rupert Murdoch.

I am not allowed to tell you how or where I sat down with mega tycoon Rupert Murdoch. Let’s just say he personally phoned me one late night this week saying he had to tell me, EXCLUSIVELY, how he really feels about The News of the World shutdown, his role in the UK media-world, his links with Rebekah Brooks and his relationships with British politicians.

We met in an anonymous hotel that he owned. Mr Murdoch was wearing a dark blue suit, striped tie and tassled loafers. He was relaxed, looking slightly wan from his cross Atlantic trip but tanned after his Idaho away-days with other bigwigs ten days ago.

I started by asking him how he sees the News International drama:

Howard Elston (HE): Mr Murdoch, where do you and Britain stand today in regards the future of your media holdings in the UK?

Rupert Murdoch (RM): I stand by my decision to close the News of the World becausae they got caught- which is a crime in my book. I will  allow my other papers to hold power to account for the common man. As for..

HE: Yes, your tv holdings?

RM: BSkyB is a broadcaster that is there to hold power to account for the common man. And that’s who we broadcast for. And with my holdings in Sky Deutschland and Sky Italia, it would be a backward step in my obligations to the common man if I didn’t buy BSkyB to tie these operations up under one big banner.

HE: You’re doing this for your average reader or viewer?

RM: That’s right. That has always been my aim. I own papers that hacked into murder victims’s phones, allegedly into medical records of sick children and families of war heroes to help the average UK citizen.

HE: No other reason?

HE: Let’s move onto  politics.

HE: What’s your relationship with David Cameron?

HE: And your relationship with Tony Blair? I believe he visited you halfway round the world before he started his stint as Prime Minister all those years ago.

RM: There’s a common misunderstanding here. Tony and his lovely wife Cheryl were just passing by when they dropped in back in 97. Kind of like stepping up to the front door to borrow a beach umbrella and some BBQ equipment.

HE: You didn’t talk politics?

RM: With Tony? Why should I?

HE: He was about to become Prime Minister of Britain back then.

HE: Let’s move to Rebekah Brooks…

HE: You haven’t sacked her. She was editor of The Sun when it illegally got hold of the medical records of Gordon Brown’s sick child… she was News of the World boss when her staff were hacking private phone numbers, she was your right hand man when…

HE: So she knew all along about..

RM: This is an internal matter which we will investigate.

HE: Is it right to investigate yourself?

RM: The police in London are investigating themselves . What better role model could we want?

HE: Finally, Mr Murdoch, will you be selling all your UK papers to fund your satellite holdings?

RM: I think that is an ignorant and baseless presumption. Newspaper sales are falling, print advertising is through the floor, all my papers are wallowing in corruption and I need to buy out all of the BSkyB satellite sector to solidify my broadcasting portfolio where all the profits are. What gives you the idea that I’d sell my newspaper side of things? Ink is in my blood.

HE: Thank you, Mr Murdoch.

RM: And thank you for allowing me to get the truth out to the common man, Now, I have to leave for America where all my real money is tied up.