It’s nine years since I wrote my first letter  asking why Birmingham Council wanted to demolish the Central Library – and five years since Friends of the Library was started. 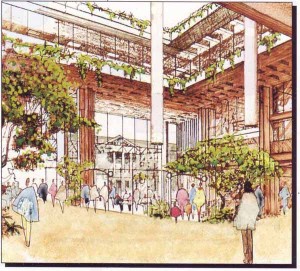 Artist's impression of the plan for Paradise Forum interior

At first the council claimed that the building was ‘crumbling’ and too costly to repair, but the litany of spurious reasons that have been trotted out ‘ad infinitum’ by councillors and officials since serve only to hide the underlying reason – that Birmingham Central Library, regardless of its architectural merit or its fitness for purpose, happens to stand on what the council thought was a property goldmine. 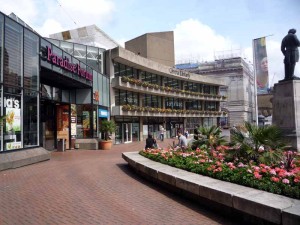 Paradise Circus was, they believed, a piece of land in the heart of the city on which world-class companies would queue up to build their shining new corporate headquarters.

Or so they thought in the year 2000 when they hatched their plot.

The latest reason that has been invented for demolishing the Central Library is that its a ‘blockage’ – something which nobody wants to have in a city centre, a motorway or a drain.

The council says it wants to remove the ‘blockage’ because it not only stops people having important views of the Council House but it deters pedestrians walking from New Street and Victoria Square to Centenary Square and Brindleyplace. Councillor Mullaney even claims that he has seen people arrive at the glass doors of Paradise Forum and turn around thinking there was no way through to the other side.

Nowadays town planners use the abstract term ‘connectivity’ to describe the horizontal flow of pedestrians along the ground, an activity known to the rest of us as ‘walking’. So what need to be done to improve the ‘connectivity’ of Paradise Circus?

Its worth recalling that before the council glazed in the concourse under the Library – called it Paradise Forum – and leased it to a developer who in turn sub-let it to the businesses that crowd it out today, it was open for the public to freely walk through. Admittedly it was too open and windswept for some and ideal for skateboarders, but a blockage it was certainly not. It was possible to see through from one side of the building to the other and to glimpse the Council House through the columns on your way from Centenary Square. The sketch by Priddey that was on the front of the Telephone Directory illustrates this well. 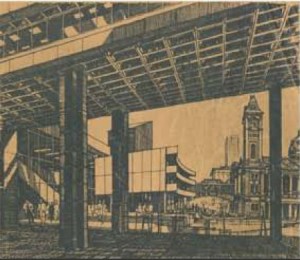 Whatever blockage exists today is therefore entirely of the council’s own making and can be removed without demolishing the building. This is quite practical, as Friends of the Library will show when they publish their architectural proposals later this year to show how it could be done.

The ‘connectivity’ argument will be exposed as the latest attempt by the council to justify the sacrifice of a sound and useful building for the sake of a redevelopment plan that shows little sign of being implemented. That is until they think up another reason for demolishing it.