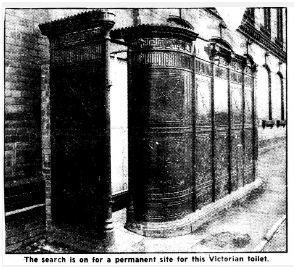 Birmingham blogger Andy Mabbett is in search of a piece of Victorian ironwork that once served as a urinal the city.

He writes, “In late 1986 and early 1987, to make way for the construction of the International Convention Centre in Birmingham, a number of older buildings had to be demolished, and entire streets disappeared.

“On one of those, Edward Street, was a cast-iron street urinal. This was a listed structure: despite its mundane function, it was an impressive and decorative piece of Victorian engineering.”

Read more about this on Andy’s blog here

If anyone has any idea as to the whereabouts of this piece of Birmingham’s historical street furniture please contact Andy via his website.