Birmingham City Football Club will honour the life of Arthur Labinjo-Hughes at men’s and momen’s home matches later this month for the club’s annual Arthur Matchdays, in aid of the NSPCC.

During the Men’s team clash with Preston North End on Saturday 21st January, the Blues players will wear a special one-off kit approved by the Football League, with all club profits from shirt sales going directly to NSPCC Birmingham. The limited-edition jersey will feature an ‘Arthur 6’ emblem in the centre and will be on sale from Monday 16th January.

Along with the fundraising from the shirt, one hundred NSPCC x BCFC teddy bears will be available in the club store on Cattell Road, with all proceeds going to the children’s charity. 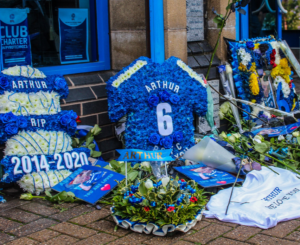 Other fundraising elements across the weekend include an optional donation on the club’s ticketing platform, online auctions of both Men’s and Women’s match-worn shirts after the games, and in-stadium bucket collections.

The annual dedicated matchdays began last season at the home games closest to Arthur’s birthday (January 4th) to celebrate the life of the young supporter, with the image of Arthur wearing his Birmingham City shirt being shown at football grounds across the country following his death.

Birmingham City also partnered with Solihull Moors during pre-season to raise further funds for NSPCC Birmingham, with the charity working with Blues throughout the year also.

Tickets for both men’s and women’s Arthur Matchdays are available here, and the limited-edition shirts and teddy bears will be on sale from Monday 16th January in-store and online.

Ian Dutton, managing director at Birmingham City Football Club, said: “The people of Birmingham will always remember Arthur Labinjo-Hughes, and as a club we want to continue our tradition of celebrating his life. Each year, we want to raise more and more money to support NSPCC Birmingham and to make sure Arthur’s legacy lives on.”

Amanda Synnott, NSPCC Community Fundraising Manager for the West Midlands, said the charity’s CEO Sir Peter Wanless would attend the match on Saturday 21st January and the organisation was hugely grateful for the club’s support.

“The NSPCC’s helpline is available for any adults who have concerns about a child. Our Childline service is also available around the clock for children to discuss any concerns they have, at childline.org.uk, or on 0800 1111.”