Largest ever swing band to hit Broad Street this weekend.

The largest ever swing band to perform on Birmingham’s golden mile of Broad Street is hitting the city’s live music stage this weekend with a free-to-enter gig.

Steve Emisson, general manager at Velvet, said: “We’re so excited about hosting the Neil Coley Big Band in what will be a first for Broad Street, as no other venue on the ‘golden mile’ has ever had such a big band play. 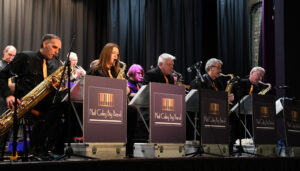 “It’s free admission to all at our Birmingham Rocks events, but we do advise music fans to get in early to find a good seat or place to enjoy what will be a great evening.”

Keyboard player Neil Coley founded his Big Band in 1998, and over the years the band has established a formidable reputation as one of the finest swing bands in the Midlands. It has a wide repertoire of music, ranging from the early jazz sounds of the 1920s to the present day.

The band, based in Oldbury, brings a unique combination of excellent musicianship, talented soloists and singers, including five saxophones, four trumpets, four trombones, and a rhythm section of drums, keyboard, bass and guitar.

“We work with a number of top-quality vocalists to give our audiences authentic renderings of the great songs of the past and present made famous by the likes of Frank Sinatra, Louis Armstrong, Michael Buble, Ella Fitzgerald, Doris Day, Adele and many others.

“If you’re in the Birmingham area this weekend, come along to the iconic Velvet Music Rooms on Sunday night – it’ll be a blast!”

Former Black Sabbath manager Jim Simpson, whose Big Bear Music outfit organises the Birmingham Rocks events, added: “This Sunday is going to be very special – a 17-piece big band in a Broad Street bar – now that should be something. You don’t want to miss this one!”

The Neil Coley Big Band will be at Velvet Music Rooms at 200 Broad Street, Birmingham, B15 1SU from 6 to 8pm. Entrance is free.