One of Birmingham’s brightest talents, The Clause, will be celebrating Christmas with their biggest gig to date. 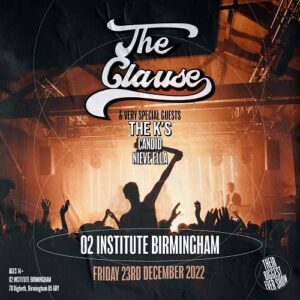 The indie four-piece, whose sigalong summer anthem Forever Young, was released last July to widespread acclaim, have won fans around the country by combining sixties sounds with nineties attitudes and a modern approach.

Now, after a year of touring and festivals, they’re set for their biggest test to date. Friday 23rd December will see the band make a triumphant homecoming, at Birmingham’s iconic 02 Institute.

Tickets for this not to be missed show are available here.