What’s the connection between Elvis, Paul McCartney and Noddy Holder?

Answer – Journalist and Author Suzan Holder has written musical rom-com books featuring two of her musical heroes (… and she is married to the other!)

Suzan will be revealing how Presley, the Beatles and former Slade frontman Noddy have all inspired her work when she is guest speaker at Birmingham Press Club’s annual Christmas Lunch on Tuesday, 20th December.

Suzan (pictured), whose second rom-com novel was published in September, entered journalism when, as a young teen, she took a job on the Black Country Bugle, later moving on to various Midland newspapers and news agencies. 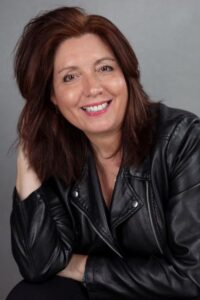 Suzan then went into television with both Central and Granada Production Studios, forging a career that led to a stint as Executive Producer of ITV’s Loose Women and life as the wife of rock musician and actor Noddy Holder who, with Slade, had six number one hits in the UK singles charts during the 1970s.

Using her skills as a reporter and her experiences in a rock’n’roll world she landed a book publishing deal with HarperCollins and her first two rom-coms – Shake It Up, Beverley and Rock ‘n’ Rose – have been released this year.

Both books weave her love for music around characters and stories inspired by her own real-life adventures.

Her debut novel, Shake it Up, Beverley, a rom-com about a Beatles fan and her Internet dating adventures, was adapted from her original stage play, Shake It Up Baby, which has been performed around the UK. It was workshopped in London with Paula Wilcox in the role of Bev.

Suzan’s latest book, Rock ‘n’ Rose, is about music-mad Daisy, who has a family mystery to solve. She heads to Memphis to uncover a link between her Nana Rose and The King – and finds both romance and the truth behind the gates of Elvis Presley’s Graceland. Suzan’s own trip to Graceland inspired her to come up with the idea for the novel.

Today, Suzan, who comes from Halesowen, is also a magazine columnist and regularly discusses news and current affairs on radio and TV.

Press Club chairman Llewela Bailey said: “We are delighted that Suzan will be describing her journey from newsroom to bookstore when she appears as Guest Speaker at our ever-popular Christmas Lunch, which is again taking place at Edgbaston Golf Club.”

• Christmas Lunch guests will be able to purchase signed copies of Rock ‘N’ Rose (£8.99), which was ‘unveiled’ at a book launch at the Castle Bookshop in Ludlow on 2nd September.
• To book your place at the Christmas lunch email [email protected].