The region’s beer scene recognised in 2023 edition of the real ale bible.

With bad news for the hospitality industry seemingly coming from every direction there is welcome relief for local beer drinkers with the publication of real ale bible the Good Beer Guide 2023, out this week.

The fiftieth anniversary edition of the Guide, published by the Campaign for Real Ale, shows how much the beer scene in the region has changed over recent years. Usual regulars such as the Wellington, Post Office Vaults and the Craven Arms are all included, but there are also mentions for less traditional outlets in the city and elsewhere. 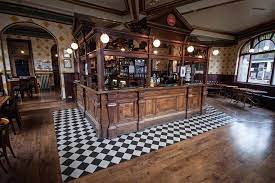 A total of 30 venues in the city feature in the guide, ranging from the listed splendour of the Barton’s Arms in Newtown (pictured) to examples of the growing number of micropubs and brewery taps in the city. Location is no barrier, from the Butlers Arms at Four Oaks in Sutton Coldfield to the Black Horse in Northfield.

There’s also for the first time a separate section for the region’s breweries, of which there are now thirteen within Birmingham, a remarkable figure considering that for many years there was no beer brewed in the city at all

More than 4,500 of the best pubs, clubs and bars in the country are featured, along with details of over 1,800 breweries currently operating in the UK, all selected by a small army of volunteer CAMRA members. Also included are such legendary local hostelries as the Great Western in Wolverhampton, Sedgley’s Beacon Hotel and the Batham’s brewery tap, the Vine (better known as the Bull & Bladder) in Brierley Hill.

Also featuring in the guide, which runs to 944 pages and has a retail price of £16.99, are articles on the growing number of beer styles found around the UK, the move towards environmentally-friendly drinking, plus news of the campaigns that have made CAMRA one of the most successful consumer groups in the world.

For more details of CAMRA and the Good Beer Guide 2023, visit camra.org.uk