Multi-instrumentalist brings her band to the Jewellery Quarter.

The award-winning Charlotte Glasson Band are back, and promoting their new album Bonito with a gig on Friday 11th November at 1,000 Trades Filled with colourful grooves, lush ballads and high energy swing ,it will be a night to remember. 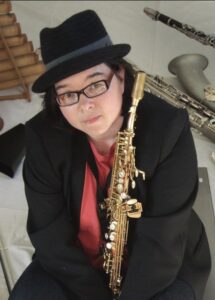 Since winning the Best Newcomer Award at the Marlborough Jazz Festival, the Charlotte Glasson Band have been wowing audiences at many festivals including- London, Southport, Swanage, Teignmouth, Ealing and Oxford. Stylistically Charlotte’s compositions draw on influences from all around the globe, but she has the vision to combine these into something that is uniquely her own, upbeat and bouncy on the surface but with all sorts of interesting twists and turns as a sub-text. And she uses the enormously varied instrumental resources at her disposal in an unfailingly imaginative way – her own armoury alone contains a small orchestra’s worth of sonic possibilities.