Inspired by the hundreds of Polish Shakespeare translations, theatre posts and more that can be found in the Shakespeare Memorial Library, A Little Patch of Ground is free to attend. However booking is required. 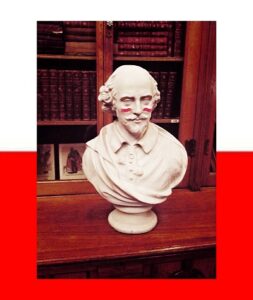 The Everything to Everybody Project collaborated with a team of researchers and theatre makers from Parrabbola to discover the Polish Shakespeare holdings in the Shakespeare Memorial Library and to support the creation of this guided performance, A Little Patch of Ground.

The performance features two live performers, who work in conjunction with an audio recording which the audience listen to via a phone or other player. The live material will include Shakespeare in Polish, as well as the Shakespeare connections between England and Poland, and some details of some of the Polish material in the collection.

Philip Parr, Artistic Director for Parrabbola said: “A great many stories emerged as a result of our research with the Everything to Everybody Project team, what came to light was the Polish struggle for freedom and making theatre during censorship: always with Shakespeare’s words as an inspiration. We’ve been able to use the inspiration to inform conversations with the Polish community and these interviews have enabled us to create ‘A Little Patch of Ground’. We look forward to taking audiences on a journey through Birmingham.”

Ewan Fernie, Project Director of the Everything to Everybody Project said: “Birmingham’s Shakespeare library holds material in over 90 different languages, including some very special Polish holdings. The visionary founder of the library, George Dawson, spoke in favour of Polish independence in the Town Hall in the mid nineteenth century and it is an honour and a privilege to revive Birmingham’s links with Poland’s Shakespeare heritage and the pioneering struggle for European freedom thanks to the wonderful Parrabbola.”

A Little Patch of Ground takes place on 4th and 5tt November, beginning at Snow Hill Station and will last for approximately fifty minutes. Audience members are asked to bring along a smartphone and headphones in order to download the audio recording. Each performance will end at the Library of Birmingham where participants will have the opportunity to view the Everything to Everybody: Your Shakespeare, Your Culture exhibition. Free to visit, the exhibition is a collaboration between the Royal Shakespeare Company and the Everything to Everybody Project and is presented by the Birmingham 2022 Festival.

Please note that the performance will take place at various locations across the city centre and on a range of surfaces so make sure to wear comfortable shoes and bring waterproofs if it is raining. Anyone with access concerns should contact Parrabbola for more information [email protected]

A Little Patch of Ground is created by Parrabbola – Aleksandra Sakowska, Philip Parr, Hania Lange and Polish actor Leszek Tarasewicz from Gdansk as part of the Everything to Everybody Project. The original dates were postponed following the death of Her Majesty the Queen.