131 films to be screened, free of charge, over ten days.

The eagerly anticipated 2022 Birmingham Film Festival gets underway in just a couple of weeks, bringing 131 free screenings to Millennium Point in a ten-day celebration of moviemaking.

Taking place from November 4th to November 13th, cinema buffs are invited to watch an incredible array of films shown on the biggest cinema screen outside London. The bill includes everything from short one-minute movies to full length feature films, created by up and coming and professional directors from across the world.

Thousands of visitors are expected to the free screenings, as well as seminars, workshops and conferences led by some of the top people in the business, making it the biggest film and media event in the West Midlands. It culminates again in a glittering red-carpet awards ceremony.

Kevin McDonagh, President of Birmingham Film Festival, said: “This annual ten-day event is about celebrating every aspect of film and screen and establishing Birmingham as hub of creative talent.

“We want to nurture and inspire budding filmmakers and actors of all ages, giving them the opportunity to meet and learn from some of the biggest names in the business, as well as the chance to see a variety of films shown on a large screen. 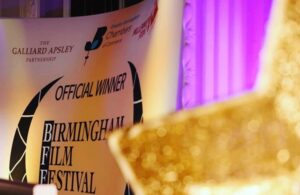 “We’ve had over 1,000 submissions again and there’s some fantastic talent being demonstrated. The Grand Jury will definitely have a hard time choosing the winners of this year’s festival.

“Thanks to support from our generous sponsors, we’re able to make this event as accessible as possible, with all the screenings being free to attend, and the seminars costing just £10 each for the opportunity to learn from the film industry’s key experts and decision makers.

“This is our seventh festival, and it continues to grow. We can’t wait for it all to get started at the launch party on November 4th.”

This year’s festival received over 1,000 entries, with the best submissions being put forward to compete for 30 awards in 30 categories. Winners will be chosen by a Grand Jury of industry experts and revealed in the star-studded, red carpet Birmingham Film Festival gala dinner. Awards up for grabs include best film, best feature, best short, best documentary, best international film and local film, as well as gongs for actors, cast, young filmmaker and students.

All shortlisted films will be screened at Millennium Point, where movie buffs will be able to take in a wide variety of genres across feature films, documentaries, real-life stories, music videos featuring local artists, poems, silent films and more. All screenings are free to attend, but places do need to be booked via the Birmingham Film Festival website. Monday night’s session (8pm on November 7th) will showcase a selection of regionally produced films hosted by the Birmingham Producers’ Forum, followed by a meet-up in the bar afterwards.

Alongside the screenings is the popular seminar programme which brings together film industry experts and provides an incredible opportunity for budding filmmakers, actors, writers and directors to learn and network.

Seminars take place on Friday, November 11th, with panel discussions on the topics of Making Movies in the Midlands, Grow your Media Business, Casting Directors Q&A and Get Your Next Film Job.

Other events include a launch party on November 4th, actors meet up on November 11th, and of course the glamourous festival finale with the Gala Awards at the Burlington Hotel on Saturday, November 12th.Gala tickets are available and include drinks, a three-course meal, prize giveaways and the opportunity to meet a celebrity or two.

Tickets for all events, both free and paid, are available from Birmingham Film Festival.