Football’s relationship with climate crisis the subject of new film.

The documentary, which is now available on Sky on Demand, explored the impact of climate change on football, how football contributes to climate change and what governing bodies, clubs, managers and players are doing to tackle the climate emergency. 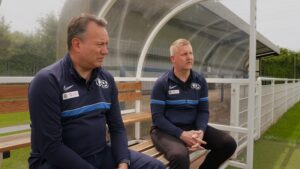 Birmingham County FA’s involvement in the documentary followed the launch of its Save Today, Play Tomorrow campaign, its over-arching four-year strategy to create and support lower-carbon football in the West Midlands.

Save Today, Play Tomorrow is a series of planned initiatives, strategic partnerships and infrastructure investment that fall under four key themes – health and wellbeing, positive education, climate action and reconnecting football with nature.

Richard Lindsay, who also leads on the County FA’s Save Today, Play Tomorrow campaign, said: “We are so proud to have been asked to be part of this hugely important Sky documentary. Over the last 18 months we have tried to play our part through the Save Today, Play Tomorrow programme to empower and mobilise the grassroots game with a series of planned initiatives that help to protect our planet and safeguard the game for future generations to enjoy.”

Speaking ahead of the documentary premier, Jonathan Licht, managing director of Sky Sports, said: “Climate change is something that is threatening sport and wider society, and we are extremely passionate about trying to encourage sports fans to act and make changes in their own lives. To have sports fans taking more than 1.7m tangible actions over the summer of elite sport is great to see and demonstrates what a difference we can continue to make when all corners of the sports industry come together to take purposeful action.”