Mexican Day of the Dead celebration for Coffin Works.

Brummies are being invited to a special Day of the Dead event with food cooked by a Mexican chef, a tour of top city attraction Coffin Works, a film and a discussion over cake and drinks.

Food for Thought: A Special Celebration for Day of the Dead brings the Mexican tradition into the heart of Birmingham and invites people to learn more about the background of this popular event.

Created by Coffin Works, Itzatna Arts and community interest company BrumYODO, the event takes place in the café at Coffin Works in Fleet Street on Thursday November 3 between 6.30-8.30pm.

The evening begins with a guided tour of the museum’s Stamp Room and the chance to learn more about the history of Newman Brothers, a Jewellery Quarter firm which produced some of the world’s finest coffin furniture including the fittings for the funerals of Joseph Chamberlain, Winston Churchill and the Queen Mother. 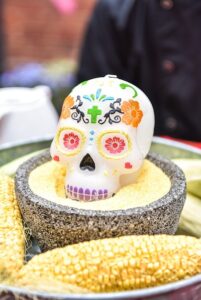 Then guests will be invited to dinner, discovering how the Mexicans honour their ancestors and tasting traditional festival foods specially created by Birmingham-based Chef and Visual Artist Alfredo Hau of Itzatna Arts.

Born and brought up in the Yucatan Peninsula of Mexico but based in Birmingham for more than twenty years, Alfredo will be blending Catholic and Mayan traditions and recipes including the traditional Mucbipollo, a rich, earth-baked, Yucatecan chicken pie, corncake dessert and refreshing Mexican mocktails.

Alfredo says: “The Day of the Dead is a celebration, an opportunity to share past and present memories of those people who were a big influence and inspiration in our lives. It’s a yearly ritual to honour those who are not any longer with us, but whose presence is a constant motivation to live life like there will not be a next.

“At Food for Thought: A Special Celebration for Day of the Dead I will be recreating some of that festival here in Birmingham with the foods we traditionally eat and an ofrenda where we remember our ancestors.”

A tradition which originated in Mexico but is now celebrated worldwide, Day of the Dead is a national holiday in which families gather to create ofrendas with the favourite foods and drinks of their ancestors, and visit their family graves.
The festival, which also sees parades of people with faces decorated as skeletons and wearing garlands of orange carnations, features in both the James Bond film Spectre and the Disney animation Coco.

After dinner, Itzatna Arts will give a presentation about the regional traditions of Hanal Pixan which translates as ‘food for the souls’ in the Yucatan, featuring short films and videos from Itzatna’s immersive dining experience in 2021. This will be followed by an informal conversation over cake and drinks facilitated by BrumYODO, a community interest company founded to promote open and honest discussion around death and dying.

BrumYODO Board Member Diane Parkes said: “The Mexican Day of the Dead is a fantastic way to encourage us all to think about how we can celebrate the lives of people we have loved who have died – and for us to consider how we would like to be remembered in the future.”

Food for Thought: A Special Celebration for Day of the Dead is one of a series of community engagement events organised by Coffin Works, which opened as a museum in 2014 and recently won the Small Visitor Attraction of the Year Award at the West Midlands Tourism Awards 2022.

Museum Manager Sarah Hayes said: “We have a gem of a museum here right in the heart of the Jewellery Quarter and we want to share this wonderful resource with our local community. Our events are incredibly varied from tours and craft fairs to storytelling evenings and meals, so this event is part of an ongoing programme.

“Our museum is built around the lives of people who worked at the Newman Brothers’ manufactory and we honour their legacy by keeping their stories alive. This is why we’re delighted to be hosting the exclusive Day of the Dead celebration, as it will perfectly complement what we do, but with an added twist!”

Food for Thought: A Special Celebration for Day of the Dead takes place at Coffin Works in Fleet Street, Birmingham, B3 1JP, on Thursday 3 November between 6.30-8.30pm.

Tickets cost £25 including a two-course meal, with vegan and vegetarian options and mocktails followed by a choice of wine, beer, tea or coffee. Places are limited and can be booked here.