A national treasure is coming to town.

On Friday 9th September there’s the chance to see and hear a national treasure of the UK jazz scene in his most comfortable setting when trumpeter Henry Lowtherplays 1,000 Trades with his band Still Waters. 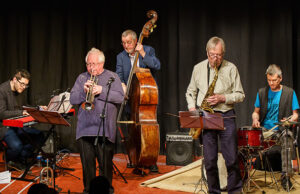 Performing with his all-star band, Henry offers the chance to listen to a live gig of original poignant music, and if you also want a chat about his life with the greats of world jazz this is your chance. Henry started playing jazz in the 1960’s boom, when British players found their own voice. He has played with (almost) everyone in jazz, as well as early pop bands such as Manfred Mann. This is your chance to see him and his acclaimed band, in the intimate jazz club atmosphere that this band relish.

Coming from a man with over fifty years’ playing experience with small ensembles, big bands and orchestras, of free and composed and classical, with jazz luminary all over the world, from a 45 year association with John Dankworth, soloing in Scott Stroman’s projects, to lead trumpet with both Gil Evans and George Russell, from Woodstock in 1969 with Keef Hartley’s Band to many and continuing years with the London Jazz Orchestra, this promises to be an unmissable evening.