One week to go until Birmingham Phoenix return.

Birmingham Phoenix’s men’s and women’s teams will be back in action at Edgbaston for unmissable home fixtures from next week, as cricket’s most fast-paced competition returns to excite crowds with another year full of world-class sport and live entertainment for the whole family.

The thrilling home action begins with a standalone men’s fixture on Wednesday 10th August, when the team take on reigning champions Southern Brave at 6:30pm. Fans can also expect a live performance from Birmingham-born, BBC Introducing musician Leadley, who will be singing her hits for the crowd pre-match.

Returning with a bang, Birmingham Phoenix women’s team will be joining forces with the men’s fixtures from Monday 15th August, when the fixtures will return to the popular double-header format, with both men’s and women’s teams playing on the same day – with tickets enabling fans to enjoy both matches. The women’s side will face Trent Rockets at 3pm, before the men’s team take on the team later in the evening. 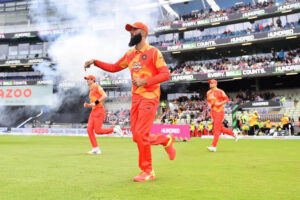 Fans of all ages can also enjoy another two double header fixtures at Edgbaston on Friday 19th August and Sunday 28th August, where both sides will play Northern Superchargers and Manchester Originals.

Birmingham Phoenix’s men’s team will be captained by Moeen Ali with Sophie Devine skippering the women’s team, who are both all-rounders.

What’s more, supporters can enjoy up-beat live performances from some of the most exciting names on the UK music scene, as part of a collaboration with BBC Music Introducing. DJ 2NV, Birmingham Phoenix’s resident DJ, will provide entertainment at every Edgbaston fixture, with Leadley performing on Wednesday 10th August, and Birmingham-raised Kofi Stone bringing high energy entertainment on Monday 15th August. West Midlands based Big Image will also be entertaining on Friday 19th August and Jordan Mackampa is set to perform at the last home fixture on Sunday 28th August.

As well as the excitement of the home fixtures, Birmingham Phoenix fans will have plenty to discover at Edgbaston Stadium, including the chance to become part of The Hundred Club and receive a special VIP package designed for the whole family. Members can enjoy some of the best seats and interactive games, while being in with the chance to meet players and cricket legends.

The Hundred offers visitors a memorable, fun-filled day out with fantastic sport, entertainment, and show-stopping moments to enjoy with family and friends. Tickets are great value for money, with adult tickets starting from just £18, £5 for under 16s, and under 6s go free.