Sonia Sabri Company, who took part in the spectacular Opening Ceremony of the Birmingham 2022 Commonwealth Games, are back in the city this month to perform preview taster performances of their new touring production Mughal Miniatures.

Mughal Miniatures celebrates the deep-rooted cultural, political, and human links between Birmingham and the Indian subcontinent and is inspired by Mughal Miniatures, tiny, highly detailed Indian miniature paintings that can be traced back to the ninth century. 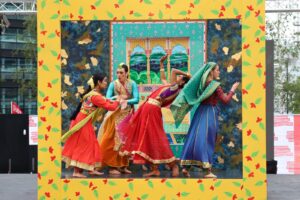 These beautiful and ornate scenes will transform from still pictures into bursts of dance and music, before returning to well-behaved stills. Surrounded by brilliant reds, blues, greens, pinks and golds, willing audience members will be invited to become part of these interactive ‘living pictures,’ taking on roles within the scene.

The first of several performances will take place at the city’s famous Birmingham Museum & Art Gallery on Sunday 14th August (11.30am, 1pm, 3pm) where visitors will also be able to take part in FREE drop-in craft sessions with renowned Textile Artist Jane Thakoordin who has worked for many years with communities, disadvantaged and vulnerable groups across the UK.

Sonia Sabri, Choreographer and Artistic Director of SSco said “I had most the most amazing experience as Cultural Leader at the Games choreographing one of the performances televised across the globe. So, it’s great that I can bring the work of SSco directly to Birmingham audiences again with my new production Mughal Miniatures. I’m extremely excited that these taster previews will be developed into a much larger outdoor production which will tour in the future – Brummies and visitors to the Birmingham 2022 Festival can definitely say they have seen it first!”

Mughal Miniatures has been created with the help of women from Saheli Hub in Balsall Heath who have shared artwork and stories which play a significant part in the performance. Many participants from Saheli are from underprivileged and underrepresented communities and their contribution has helped them to discover themselves as valued members of society.

Free performances of Mughal Miniatures will also take place across Birmingham Weekender during August Bank Holiday from 27th-28th August. For times and locations go to birminghamweekender.com.