Silver jubilee brings in artists from around the world.

Fierce, the Birmingham biennial festival of international performance, has announced the programme for 2022 – it marks the biggest programme ever for Fierce, celebrating the festival’s 25th anniversary. The programme welcomes international artists from Tokyo to Rio de Janiro as well as from the West Midlands. It embraces the outlandish and the new, presenting over twenty fresh and feisty productions of the kind that the festival has become acclaimed for. 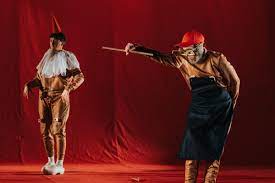 The 25th anniversary festival will stage incredible works in unusual places. Fierce 2022 will explore themes including First Nations politics, non-human perspectives, rituals of cleaning and healing and gender identity. Through a line-up of joyful, compelling and subversive world and UK premieres, the festival will highlight new performance practice from around the world, with UK debut performances by many acclaimed international artists as well as unveiling a number of very special homegrown Fierce commissions.

The programme brings together a diverse range of artists and voices from around the world, united by their radical, insightful and political approaches to creating art. A festival that has been promoting Birmingham and the region across the world as a vibrant, diverse and tolerant place for the last quarter of a century, they consistently push boundaries and bring work to the West Midlands that is at the forefront of the international creative world, providing a fresh and feisty voice for the city.

The announcement of the 25th anniversary festival programme comes in one of the most ambitious years yet for Fierce, the company having produced two major projects at Birmingham Festival 2022 this summer. Key To The City reached over 50,000 people and gave citizens new encounters across their city and the Healing Gardens of Bab brought queer artists from all over the Commonwealth to the West Midlands to interrogate their relationships with the British Empire during the Commonwealth Games.

Artistic Director of Fierce Aaron Wright says: “The enfant terrible of the British Festival scene may well be coming of age, but we’re thoroughly refusing to grow up! It’s already been a huge 25th anniversary year for Fierce, but we still have our biggest programme to come. Postponed from 2021, this programme has been three years in the making and represents some of the most exciting performance being made in the world today. We can’t wait to bring this world class programme to audiences across the West Midlands.”