Richard Lutz is caught by the cold, almost breaks his neck and hears a story of dread from across the winter sea 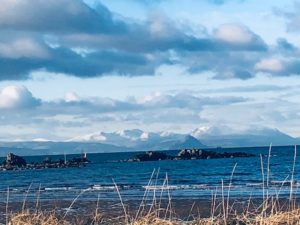 The islands and headlands are floating above the sea. They are cut from a Japanese print and then pasted into the western shores of Scotland.

Bute, Cumbrae, Little Cumbrae, the Kyles of Bute, Arran, the tip of Kintyre, Sanday Island and the 1,000 foot high Ailsa Crag all hover above water that’s the colour of freezing blue.

The Arran high range, though, is losing its snow line. You now can see the lower fells which are back to brown and green. But the snow, of course, reaches up to the 3,000 foot Goat Fell peak, as above, which caps the twisty ridge.

The Strathcarrick beach is frozen and the sand where I walk is coated with invisible ice and I take a painful tumble on the slippery shIt’s near where a remarkably calm gannet sat for hours after its left wing was ripped away. Was it a feeding seal, or damage done by a rogue net or a sharp metallic shard of sea-rubbish? The bird had magnificently startled eyes and a feeding beak like a sword and the rescue folks, I had been told, were on their way as the gannett sat and waited.

In all, the weather today is not kind. When the wind gets up, I’m reminded of Edwin, old and settling back in his last years. “What I’m going to miss,” he told anyone who listened, “is the weather.”

“Not the warm summer weather,” he explained in a hoarse whisper, “but a wet roaring wind that you can’t ignore.”

Edwin and his cherished weather aside, I head inland for the River Ayr which curves and runs from the derelict mining village where Liverpool legend Bill Shankly was born and 45 miles downstream to the Clyde coast.> 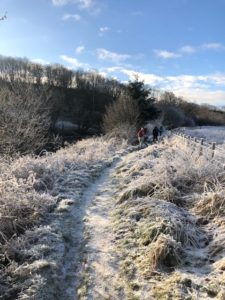 The river is partially frozen and renowned for its muddy paths and banks, as above. I grab the waterproof rubber Wellingtons from my car rather than my leather boots. I figure I’ll need them because of all the muck we’ll blunder through as a lazy oxbow slows the water on its course to the sea.

But the mud is rigid and frozen too. The wellies are useless, more than useless as they slip and slide all over the rippled mud-ice. It’s more skating than walking and I’m happy when the eight mile route is finished and I haven’t broken my neck on the cold banks of the Ayr.

My trip home is to the southwest. Just over the horizon, south of the Mull of Galloway is the Isle of Man. It’s been, up to now, pandemic free. Bosses there run a tight ship – remember only two weeks ago, when the powers that be slapped a rogue Scottish jet-skier in the clink for having the temerity to land on its blessed shores without permission?

But suddenly, an edict is announced to begin wearing face masks. Shock and awe. Dread and doom. The island has been corrupted. A Manx correspondent sends us a dark message that might as well have dropped from Mars: “Someone has been out and about,” she warns with a note of danger. “And there are spots in the island caught up in this thing.”

Oh dear, they’ll be burning witches next on the good old Isle of Man.