Birmingham Comedy Festival is back this autumn with over eighty performances across ten days. 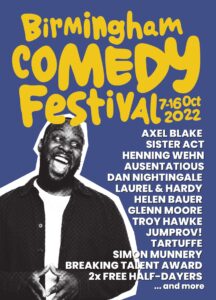 A spokesperson for the festival said: “After our hugely successful yet slightly scaled back festival last year, 2022 sees us back to full strength with a fantastic fest’ that features loads of great shows.

“There’s some big names, but the festival also continues to spotlight some of the very best talent coming out of the city and the West Mids. We’re also hosting more free/ pay what you want shows this year than ever before.”

Established in 2001, Birmingham Comedy Festival is the UK’s second longest-running comedy festival, and is one of the largest independent unfunded arts festivals in the West Midlands.