What is now known as the Birmingham, Sandwell & Westside Jazz Festival has always had a habit of throwing up great music in unlikely venues. Friday afternoon was no exception as St Phillip’s churchyard hosted New York’s Hitman Blues Band. Fronted by 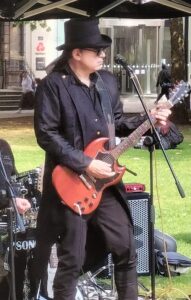 vocalist/guitarist Russell Alexander, whose vibes-playing father Ray was a long-time visitor to the festival many years ago, the band entertained an enthusiastic crowd of music fans, lunchtime workers and curious passers-by. Their ninety-minute set combined delta blues with the best of Chicago, the presence of a four-piece horn section adding a swinging Memphis touch that made the band sound at times like George Thorogood and at others Southside Johnny.

Luckily the weather held up, because the shelter the band were playing under wouldn’t have been much help later on, as a larger and damper audience hurried through a downpour to the Town Hall for the evening’s festivities.

John Otway tends not to have too many surprises up his sleeve, or anywhere else for that matter. His set remains much the same as it’s always been, but the mark of this particular brand of genius is that no matter how many times you’ve heard the stories, the intros, the explanations and seen the downright bizarre antics, you can’t help but laugh along. With the addition of roadie/straight man Deadly, Otway warmed up the audience in the way only he can, winning an encore in which he promptly managed to headbutt his way into semi-consciousness. Genius. And insane.

In contrast Wilko Johnson came onto the stage and barely said a word. He didn’t have to. Wilko’s been honing his craft even longer than Otway and his audience also know what they’re going to get, loving him all the more for it. The early part of the set, drawing on Wilko’s solo work, showed that despite lockdown and a further postponement due to illness, nothing’s really changed with either Wilko or his band. The man himself still has that manic expression; on any other stage he’d be the standout musician but here, if anything, he has to take second place to the peerless bass maestro Norman Watt-Roy.

A couple of Dr Feelgood numbers showed that drummer Dylan Howe is as rock solid as the others; Dr Dupree, a song from Wilko’s fleeting Solid Senders, had me wondering if another guitarist had sneaked onto stage, such was the way the master of rhythm and lead’s sound filled out.

When I’m Gone saw Wilko machine-gunning the audience in the time-honoured tradition and Norman laying down some seriously funky bass, while the night’s only cover, a working of Dylan’s Can You Please Crawl Out Your Window suited Wilko’s plaintive voice perfectly. 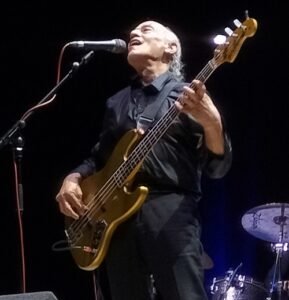 A particular highlight was the Solid Senders’ Everyone’s Carrying A Gun, a Blockheadsesque workout during which Wilko uttered his first words of the evening, “On the bass….”. Normally an excuse for a toilet break, this particular extended solo was a masterpiece.

The set concluded with two more Feelgoods anthems. Back In The Night is, and was, a great song and I can’t have been the only one in the audience to think just how great it would have sounded all those years ago with the sadly-missed Lee Brilleaux spitting out the lyrics and adding some blues harp. She Does It Right sounded just that and Wilko’s traditional encore of Bye Bye Johnny gave the opportunity for the audience to join in before the night was through. The Town Hall isn’t really made for such as the dynamic duo of Johnson and Otway, but their differing talents combined to provide another memorable night.