Jessica Harris ventures to see the RSC in one of Shakespeare’s finest.

Played out in the ominous shadows of an immense cenotaph, in the aftermath of the civil unrest of the Wars of the Roses, Richard III takes us deep into the shades of the human psyche.

Here, the dubious relationship which Richard, Duke of Gloucester, has with his conscience takes shape, as his will drives him endlessly forwards towards England’s crown, and the power it will confer. Meantime, surrounding noblemen grapple with issues of loyalty and betrayal, those bedfellows of conscience. Choices are made, sometimes prompted by personal interest and sometimes by morality. Consequences ensue.

Our fascination with Shakespeare’s character, Richard III, derives from seeing how far he will go to secure power. The brutal murder of family members who get in his way is shocking, but yet he goes deeper into the realm of evil in the murder of his nephews, the two child princes in the tower. When he proposes marrying the daughter of his brother, whose death Richard had earlier brought about, in order to secure his claim to the throne, the depths have been truly plumbed. 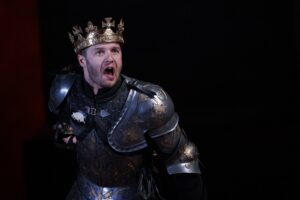 But our fascination lies also in the complexity of the character. Richard does have a conscience, but it is one which is easily dealt with. Troubled the night before battle with visions of his victims, he dismisses his qualms in a few words: ‘Conscience is a word that cowards use’.

Arthur Hughes’ performance as the ever-present Richard pervaded the stage as he twisted this way and that to secure his ends. Plotting and scheming, overturning all obstacles in his bid for the throne, Hughes’ performance grew from scene to scene, until he was a towering force of bullying, intimidation and power-grabbing. His ability to move from bluff and beguile to moments of psychotic terror was thrilling to watch. His performance of the opening soliloquy was also compelling: in this Richard reflects that his disability means he is rejected by others, and so determines to live a life of villainy, securing his place in the world through immoral means.

Although the women’s roles in Richard III are primarily those of wife and mother, scenes involving them were subtle and nuanced. The present queen, Elizabeth, the previous queen, Margaret, and the Duchess of York share their grief over the killings of their loved ones. Kirsty Bushell as Elizabeth, was measured yet forceful, Minnie Gale as Margaret was frenzied and foreboding, whilst Claire Benedict as the Duchess conveyed gravitas with her strong stage presence.

By contrast, the scene in which Tyrrell recounts smothering the princes was underplayed, and needing greater focus to make the most of this heinous crime.

The RSC’s trademarks of humour and live music rippled through the production. Hughes’ playing of Richard’s inner-thoughts were often a source of dark humour, whilst the solo voice of Lysander Newton conveyed a sense of innocence and purity which emphasised the evil acts on stage.

Focussed on what drives decision-making within the seat of power, Richard III was very much a play for our time. Directed by Greg Doran, who has now stepped down from his role as Artistic Director of the RSC, the production affirms the power of theatre as a means of speaking out about despotism.

Richard III is at Stratford until 8 Oct. Tickets.

One thought on “Review: Richard III”