Returning to BBC Gardeners’ World Live, the School Wheelbarrow competition will be celebrating the arrival of the Commonwealth Games to Birmingham, with the theme Commonwealth Countries in a Barrow!

Featuring Midlands-based schools from infant up to secondary school level, the competition encourages gardeners big and small to show off their creative flair and have their final creations on display at BBC Gardeners’ World Live, set to be enjoyed by tens of thousands of visitors.

The four-day BBC Gardeners’ World Live event – which will take place from 16th-19th June at the NEC – is an inspirational day out for all gardening enthusiasts of all ages! Filled with beautiful Show Gardens, on-stage demos, live entertainment, shopping and appearances from the UK’s favourite TV gardening presenters, there’s no better place to showcase the talents of the Midlands’ green-fingered children. 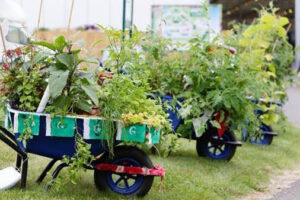 Schools participating in the competition have each chosen one Commonwealth country to represent in their wheelbarrows, drawing inspiration from the local flora and fauna, garden styles, national heritage, cuisine and culture. With 46 schools taking place covering Commonwealth countries such as India, Kenya and the United Kingdom, the competition is set to be a highlight of the show! A number of the schools are part of the Health For Life initiative supported by The Conservation Volunteers.

The Oaks Primary School, based in Druids Heath, will enter the competition with a United Kingdom-themed wheelbarrow. The participating year 2 class has chosen to create a Great British garden to not only to celebrate the joy of an English country garden, but to put their science plants topic into practice, show their support for the Commonwealth Games and mark the Queen’s Platinum Jubilee celebrations. The wheelbarrow will be planted in the United Kingdom colours and will pay homage to the great British tradition of afternoon tea, growing traditional sandwich fillers and strawberries for a strawberries and cream dessert.

Elsewhere, children from Somerville Primary School in Small Heath are celebrating the diversity in their school with a Bangladesh-themed wheelbarrow. With pupils from an array of cultural and ethnic backgrounds, the school chose Bangladesh as their Commonwealth country of choice and spoke with pupil’s relatives to plan their creation which celebrates the Bangladeshi culture.

This year, city-centre based Thornton Primary School will enter a Jamaica-themed wheelbarrow which includes plants and vegetables that represent the colours of the Jamaican flag, while incorporating vegetables used in Jamaican cuisine.

We’re delighted that the much-loved wheelbarrow competition will return this year celebrating the Commonwealth theme, which ties in perfectly with the Platinum Jubilee celebrations and the Commonwealth Games, which arrives in Birmingham this Summer.”

With lots of family fun to be had, there is plenty of child-friendly activities throughout the show to keep the little ones entertained including Plant Photography, where children can make their very own plant photos using turmeric and sunlight and also the chance for meet some chickens. Tickets are available in advance, or on the door, and kids go free on Sunday 19 June, making it a great Father’s Day treat for the whole family.