Podcast host Deborah Frances-White tells us what audiences can expect.

Since its launch in 2016 The Guilty Feminist has grown to become less of a podcast and more of a global phenomenon. With over 95 million downloads in six years, with a Sunday Times bestselling book The Guilty Feminist is part comedy, part deep dive discussion, and part activism. Here, Deborah Frances White talks about the podcast, feminism, comedy, and getting back to live shows post lockdown.

For those who don’t know, tell us a little more about The Guilty Feminist Podcast.

“The Guilty Feminist is a podcast in which we explore our noble goals as 21st century feminists & our hypocrisies and insecurities which undermine them. We believe you don’t have to be perfect to be a force for meaningful change, that the resistance should be joyful and that comedy melts armour.

“Each glorious live show will include a variety of world class stand up comics and some local guests for deep lively conversation plus a musical act to have audiences singing in the aisles. Think Live at the Apollo plus Graham Norton plus Later with Jools Holland featuring women and people of minority genders but where men are welcome. Prepare to leave entertained, inspired, empowered & at least 28% more feminist, which is coincidentally the same percentage as the pay gap.” 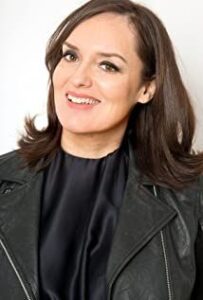 What do you think the main challenges come from in identifying as a feminist but also admitting we have insecurities and fears?

“The whole world tells us we’ve got to be exceptional and invincible and have glossy, manageable hair. Nothing
about this world tells us ‘Getting out of bed and being kind is enough.’

“We are more likely to slay dragons if we’re not constantly compared to other cooler, more successful dragon slayers on Instagram. Dragon slayers aren’t meant to feel like this apparently.”

You’ve said previously that intersectionality, the acknowledgement that everyone has their own unique experiences of discrimination and oppression, is a cornerstone of Feminism. Can you explain?

What’s your favourite things about making The Guilty Feminist? And now much are you looking forward to the live shows?

“I’ve got the best job in the world. I just love working with glorious, hilarious, powerhouse women. Before
lockdown The Guilty Feminist was always recorded in front of a live audience which some of our new listeners
don’t know. I live in London but it was often recorded on the road, either in the UK or other countries. I’ve
desperately missed our fizzing live audience in lockdown, and I can’t wait to come back to all the wonderful
cities and towns around the country and be with our community again.

“What I love is that every place has its own personality. The Glasgow audience brings a rock concert to a podcast recording. The Newcastle audience brings a riot. Manchester brings a revolution. Cardiff brings an uprising. Brighton brings a whole festival. Plymouth brings a hen night and a half. Every single place brings us something glorious and wonderful. If I
haven’t included your city or town here, please ask and I’ll tell you what I think it brings!”

Talking of lockdown, what was it like for you as a comedian? How does it feel now that there is light at the end of
the tunnel?

“During lockdown I kept The Guilty Feminist going via zoom and missed live audiences desperately. To me, the audience is half of the podcast. I found it tough but survived on Instagram lives and the wonderful messages the audiences sent me. I know I was one of the luckier people in lockdown, so I’m not complaining! But I’m more than ready to be off Zoom and in the room. Having said that, I learned to dance via Zoom and have a full routine to Get Down from Six the Musical so I can only assume Strictly will text me any minute and it’ll all have been worth it. If I don’t do a TikTok dance on this live tour, you should be very surprised. I cried the first time I was back with my audience. This tour means everything to me.” 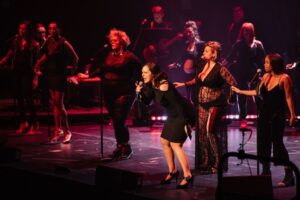 You have a lot of strings to your bow – you’re a stand-up comedian, you’re a writer, you’re a podcast host, you’re
an activist. How would you sum up what you do?

“Don’t ask me to choose between my children!!!! Without activism I’d have nothing to say. Without story and comedy I’d have no way to say it. Stand up comedy is my great love. Writing is my deep passion. Working with Amnesty International and Choose Love is my greatest privilege. The Guilty Feminist is my first born child. Don’t try to take any of them away from me. I’ll fight you!”

The Guilty Feminist has interviewed a huge array of wonderful people. Who is still on your wish list?

“Jacinda Ardern, Stacey Abrams, Michelle Obama, Malala, Margaret Atwood and Greta Thunberg. Do you have any of their numbers? Can you get them for me? Gloria Steinem came to my show in New York and they almost didn’t let her backstage. I really, really want her to come on the show but she’s busy writing right now. I feel this is going to happen and the rest will fall like dominoes.”

When you interview people on your podcast you often open with asking them to complete the sentence ,‘I’m a feminist but…’ What is the most recent personal experiences where could you apply to yourself?

What are you most looking forward to about the tour?

“Guilty feminists were the best audiences in the world before. I can only imagine what a riot it’ll be after two years locked up! We’ve added some acts in these shows that you can only see live & that’s really the best way to experience the show anyway. Come join the Guilty Feminist army.”

How can people find out more about you and The Guilty Feminist?

Go to GuiltyFeminist.com. We have almost 300 episodes people can listen to for free and I also wrote a book they can read.

The live show is touring from March all the way through the summer, including the Alexandra Theatre, Birmingham on 27th May. Tickets.