It’s impossible to avoid what you must be asked all the time, namely what have you been doing for the past two years?

“The past six or seven months have been okay. We kicked off on August 1st as a rock band with a string quartet and guest singers, a really big event at the Stables in Milton Keynes, then a week later we played to 2,000 in Glasgow and I’ve been playing since then. The whole lockdown was tiresome, though. It got boring, didn’t it?

“At the beginning we had sixty shows to reschedule, I’d released the album Uncovered and I can still call it my new album because it had been out for three weeks before the door slammed. And it hadn’t been promoted so it’s still a new album, it’s on sale on the road and at the shops. Remember that Spring was Mediterranean weather? I’m not going to complain, we’ve got a lovely big house with woodland and an orchard so I can go out and potter for an hour without leaving my property. I got exercise and I could sit outside having my breakfast. That Spring was lovely.

“I noticed that a lot of people in that time before we got bored were taking stock of their lives, and I did that too. I changed a bit, I realised how short life might be and how people could become sick so quickly then you think miracles only happen in the Bible, but what those scientists did after nine months was miraculous to develop a vaccine in that time.”

Talking to people in the music business during lockdown there was a belief that more co-operation would be needed to help the industry recover. Has that been happening? 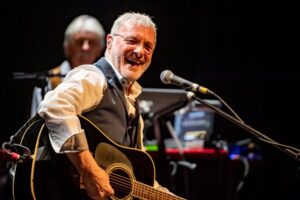 “It’s an expensive life out there, when we turn up at a venue there’s my team, the staff at the venue, it’s not cheap to get there. We’re up against it, the cost of living is ridiculous and people are worrying about the gas bill rather than buying tickets so it’s tough. We’ve learned a sense of tolerance, I’ve always put people first but I took stock. I can’t speak for anyone else but I chilled out a bit more, I think of how little possessions actually mean, gave my children stuff instead of letting them have to wait to hear my will. I hope that now we realise how a pandemic can hit so fast, maybe we can all change a bit.

“I know that on stage I’ve always had a rapport with the audience. Before Christmas I was playing Birmingham Town Hall and that night there was such an air about the place. I’ve always liked to communicate and I said at the end of the show how special it had been, that something’s happening.

“There was a sense of communion in there, not being religious, but the word in its truest sense. There was no doubt that in that room everyone was glad to be there. The shows are now often the first rock show some of the audience have seen for two years and instead of the rock’n’roll rapport, I think many artists are experiencing this communion – we’re live, this is music and I’m starting to realise how much live music means to people. I had no idea, the idea of live music, having a ticket.”

It’s like the difference between watching a football match on TV and being at the ground. I spoke to Omid Djalili recently and he talked about how when you’re in the audience at a gig the music goes through you, you feel it as well as hear it.

“I only know it from the stage, I don’t go to many concerts but I was at Elland Road watching Leeds play Liverpool and wow, I watch a lot of football on the telly but being there with forty thousand people is a different matter so that’s a good analogy, thank you for that. He’s dead right, being there is different.”

Talking of not the real thing, I heard you refused to do Zoom or any sort of download gigs during lockdown.

“No, I’m not giving it away and I can’t work from home and charge people for a ticket. A lot were doing that but it’s not my way at all. It was a good idea for some on paper but it’s not my way. I’d rather do what I did, which was see it out and then do the real thing.”

The album Uncovered. Perhaps the two best-known songs on there are Absolute Beginners and Out of Time. There must have been a bit of pressure there, following David Bowie and Chris Farlowe.

“I don’t think of it that way. I’m a singer as well and you just go in and be yourself. On the album two songs are mine and nine are not mine but they’re my interpretations of truly great songs I wish I’d written and that’s the criteria. How do you pick them? I wish I’d written them. We sent an MP3 to all the songwriters, McCartney, Mick Jagger, Dylan’s UK people, and I heard back from quite a few. I’ve had my songs covered so I know it’s a great feeling. I didn’t think I was emulating, say, Bowie, I was doing it as Steve Harley. I didn’t want to do a cover, I wanted to do an interpretation.”

You’re also touring the album and playing some unusual places. Telford, Redditch and Tamworth aren’t on your usual itinerary.

“They’re all lovely venues. It’s the acoustic band, four of us in the bus with my lighting man and a guitar tech. It’s a good way to live and a good way to travel. We see things, I like culture. I love these tours, I thought I’d been all over Britain but I’ve never been to Telford and I’ve certainly never played in Tamworth. I like to get out and see a bit of the town and learn something.”

And when you do get to these venues, what will you be playing?

“It’s still a new album, I’ve got to promote the new two year old album. There’ll be five or six songs from that but this is a great band. They’re all virtuoso players, it’s just wonderful. We do Mr Soft in a gypsy jazz style, like Django Reinhardt and Stephane Grappelli. I pay the hits, I can never understand performers who don’t want to play them, it’s a bit churlish. I’m not too showbizzy but there are certain tricks you have to keep up your sleeve and not deviate too far from what people want. You’ve got to give them what they want.”

After fifty years of touring you should have learned how to give it to them by now.

“Fifty years.. It’s mad isn’t it? I can hardly say it. I’m lucky in that we travel well, we stay in good places. Singing, that’s an exercise in itself, so I’ve stayed pretty healthy.”

During the seventies you lived in California, hanging out with Rod Stewart and living the rock star life. Do you think that was wasted on the younger you and you didn’t appreciate it?

“It certainly wasn’t wasted. The seventies was mayhem for those of us who were out on the road. But it as madness, complete madness. I prefer today but that’s how it was, we were young and exploring. Today, at my age with three grandchildren I prefer it now, I like walking on stage now and knowing I want to do it. For many years I felt like an outsider, I don’t really mix in the music industry. I only really realised when I said I don’t feel part of the music business and a woman journalist said to me, ‘But you are’, and she explained why I am and she’s right. it’s just the way my head is. I was four years as a journalist and I still mix with those guys, the reporters I worked with then are still my friends.”