Sometimes you ask a question and have a fair idea what the answer will be. So when I asked comedian Omid Djalili what he was up to, I thought it might be getting ready for a TV appearance or perhaps travelling to another date on his Good Times tour, which is taking place throughout 2022. Instead, I got something entirely different.

“I’ve just been to the physio. I’m a big football fan and I live in Ipswich. Ipswich Town asked me to a game in February and they wanted me to speak to the fans at half-time. There’s twenty-one thousand there, they interview me and I said this is great, at the Superbowl they get Snoop Dogg, Eminem and Mary J. Blige, here you have the bloke off Gladiator who has his bollocks fondled by Oliver Reed. Everybody’s going bananas, I did a couple more jokes then I thought I’d finish with the Shefki Kuqi dive. Shefki only played for Ipswich for a year but whenever he scored he did a swan dive, jumping up and diving onto the ground. I didn’t realise that he was very balletic and he could land perfectly. I threw myself up in the air and landed face first, almost dislocated my shoulder, mud on my nose and as I was being helped off everyone was shouting ‘LEGEND!!!’.”

We should end the interview there. You’re never going to top that. It reminds me of the worst injury I ever had, when I did my ankle at Villa Park.

“Really? You played at Villa Park?”

No, it was a pitch invasion at the end of the season. I jumped over the wall and my ankle gave way. I tore the ligaments and I was off work for a week.

“That’s great. This is officially the best start to any interview in my life.”

Onto more important matters. You’re doing the Good Times tour and the obvious jokes have to come about that title, so please expand on it. 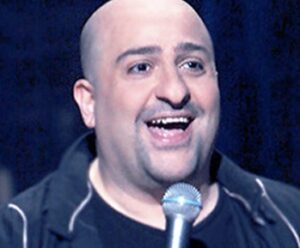 “This tour’s been on and off so many times. We’re bringing the good times back again and then get shut down by another variant and it became ironic. Are we having good times? Yeah, a great time and it’s a laugh. It’s amazing how the Good Times tour, depending on where we are in the pandemic, gets either a round of applause, recognition that we’re back, or it’s got a laugh in recognition that we’re not back at all. And I’ve actually enjoyed the laugh more when it’s a quarter full because another variant has killed the gig that night. I prefer the laugh when I say we’re brining the good times back and there’s no-one there.”

You get people saying you’re not political enough, or too political. Do you get annoyed at being expected to talk about weighty political matter when you’re a comic?

“This is the thing. It’s interesting that I got a review in the Daily Telegraph because apparently the bloke was laughing his head off and he said that it could have been more political. What he doesn’t realise is that everything I do in the show is political. There are only a couple of light moments in the show. People say to me that the best kind of political comedy is done by people who don’t identify as a political comedian. I spoke to Sean Lock about this before he dies and he said he would only do a political gag if it was funny. He didn’t believe in doing a gag and then making a fist at the end. If it’s not funny I’m not going to say it.

“The political messages are subtle but I’m one of those comics who doesn’t believe that funny should be the end. I’m not doing this to be funny, I’m using it as a means to an end. It’s there to make those political points and to make them in a way that you don’t realise they’re political. To me that’s the highest level I’m searching for so I was thrilled when they said I wasn’t doing any political material because they’d missed it. Even the reviewers had missed it. That gave me great pleasure. I wasn’t happy with a three star review because I think it’s a five star show and people like the Telegraph are always out there to keep me down and that’s exactly what I expect. But it gave me so much pleasure for them to say I wasn’t political when they were too busy laughing to realise.”

Lockdown affected us all in many ways but you had a gig when someone put a hosepipe through their exhaust.

“It was one of those awful drive-in gigs where people got, let’s say creative with their heckling. This bloke had bought a hosepipe, I was thinking, ‘What’s the point? You’re tuned into a radio station. I can’t even hear you heckle.’ This bloke got out, and he just shouted ‘How about this for a heckle?’ then he got a hosepipe and attached it to the exhaust. He fed it through his window and he turned the engine on. I just started clapping and laughing because I thought it was the best heckle ever.

“I should make it clear that no suicide attempt ever took place. It was a jokey heckle but that’s the comedy climate we live in now, where everything has to be explained and I tell you now, I have never done more set-up gags in my life. I come from a world of comedy clubs when it’s bam bam, you’ve got twenty minutes to get everything over, you’ve got ten seconds to get your first laugh. Then I found that the audience allowed me a minute or two to explain before I got the laugh, and when you get that the laugh is better. That’s something new to me and very exciting.”

Three years ago you got into trouble with a few controversial words about the Welsh language. I noticed that your Swansea and Cardiff dates have been put back to the end of the tour. Is that an attempt to hope they’ve forgotten by then? 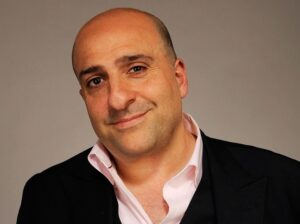 “They were cancelled because the rules were different in Wales at the time and just to be sure they were moved. But it is the further away from June 2019 the better.”

Symphony Hall isn’t really a comedy venue, do you like the larger halls or would you prefer clubs?

“I don’t really mind as long as there’s an audience there. Can you imagine those Zoom gigs and now we know how to to mute people but at the start you’d get to the punchline and you’d hear someone going ‘Mum, can you let the cat in?, everyone can hear it and it ruins the whole vibe. I ended those Zoom gigs by taking the computer into the toilet and saying ‘Tbis is my career’ then pressing the flush.

“Symphony Hall is probably the worst venue for comedy because you want the laughs not to disappear up into the ceiling. In a classical music venue you want the music to swell round whereas for comedy the laughter just disappears, which is a challenge. Even if ten people show up, if we’re losing money we have to get out there. All the good comics continued to perform, if you look at someone like Dave Chappelle, he just moved to this pub. opened up his farm and had socially distanced gigs almost every night. You can argue he was given $60 million to do a Netflix special so he had to do it, but when I say we’d do it without getting paid, we would, because even during lockdown I was putting out videos, I was doing Zoom gigs, drive-in gigs, I did a couple of socially distanced beer gardens. You can’t stop it, and that was the thing I noticed, the good ones carried on and I like to put myself in that bracket. We do it because we like it. We need the laughter of strangers to validate our existence.”

You mentioned Netflix, and there are a lot of international ways of watching TV now. Does that mean that humour is becoming more generic, or does a joke that works in, say Bridlington, not do so well in somewhere like Worcester?

“First of all, well done on coming up with two of the most obscure place names you can imagine. You have to put that in the article, getting a comedian to laugh by putting those two places in the same sentence. One thing that is very clear is that people were watching digitally in the pandemic so there is a difference when they watch communally. Comedy has a physiological impact and so when you see a band live you wan that high, with the vibrations going through your body and you can talk about it for days.

“Comedy is the same, I remember going to see Chris Rock and I talked about it for days. It uplifts you and that’s very different from watching on Netflix. It has an impact on you and that’s what people have missed. Gigs are better, I’ve never been this funny before and I think it’s because audiences just appreciate it more if it’s live. It’s like football. The live aspect is huge. Why do people go to games? Because being there is so much different to watching on TV. The show is a bit football heavy, which is why I’m always promoting it on Talksport but from a cultural and I suppose current affairs perspective football had played a big part in this pandemic. Fans are more encouraged now to call out racism, which you can see in the show, so it would be remiss not to talk about it.”