Fi.Fest, Berkshire’s popular family-friendly music festival has just announced its line-up for 2022 and its set to be a weekend of belters that will get everyone up and dancing.

Headlining the main stage this year, on Saturday 9th July 2022, will be famed English rock band Reef, along with pop rock superstars, Dodgy and the Hoosiers.

Reef, best known for Place Your Hands and recent single Shot Me Your Ace will be headlining the Saturday. Reef have recently been joined by their good friend guitarist Andy Taylor (Power Station/Duran Duran) to give a memorable end to a show. 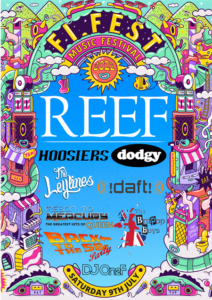 2021 sees the 25th Anniversary of Dodgy’s bestselling album, Free Peace Sweet – a fan favourite and deemed a classic album of the era, spawning hits such as In A Room, If You’re Thinking Of Me, Found You and of course, Good Enough.

Hoosiers will be making an appearance on Saturday evening, playing famed hits singles such as Worried About Ray and Goodbye Mr. A.

There will be high class bands and acts playing all day on the main stage with hours of entertainment on offer for local festival goers. So far, other acts announced include The Leylines, Queen tribute act Mission to Mercury, The Brit Pop Boys, Daft and Back to the ‘50s.

Running alongside the music stage is Fi.Fest’s Kidzone which will be packed with entertainment, rides, free shows, a sand play park and so much more. Keep an eye out for Baxter the T-Rex making an appearance throughout the day.

To keep family energy levels up high, Fi.Fest also has a food village with stall holders, both local and national, serving up fabulous fare, drinks, ice creams and treats.

Lee Page is the Fi.Fest organiser and local businessman who has been running the event for four years. He said, “As someone who works in the entertainment industry, the last two years throughout the Pandemic have been really hard. Being able to host Fi.Fest 2021 last year felt like a dream come true because we were finally able to bring friends and families together to dance, socialise and party.

“We were blown away by the support from the local community and the popularity of Fi.Fest means we can make it even bigger and better in 2022.”

Tickets for the event, which was sold out last year, are available here. Prices start at £25 adult day ticket and £15 child all day ticket.