Villa draw at home to Burnley. Dave Woodhall looks on.

If playing on a Thursday seems strange, playing the last home game of the season midweek is even stranger. Those of A Certain Age might remember that back in the days of unheated pitches and regular winter postponements we used to have all sorts of odd ends to the season. Now everything has to be crammed in so we can enjoy the Grand Final Sensational Sky Sunday.

I’m still none the wiser why we had to play on Thursday but the chance to slip an extra match into the TV schedules may as well take the blame.

Conspiracy theories aside, there was a different feel to the Villa side that lined up against Burnley. Callum Chambers was given his first opportunity to show the gaffer that we don’t need to spend big money while Ezri Konsa’s out injured, Jacob Ramsey was in for Marvelous Nakamba, which may or may not show that a defensive midfielder isn’t high on the Gerrard list of priorities either. Most intriguing was the introduction of Carney Chukwuemeka, who seemed to have no future at Villa Park a month ago, and Emiliano Buendia, proving that Gerrard does indeed listen to me when it coems to picking the team. He might have called it squad rotation, but we both know the truth. 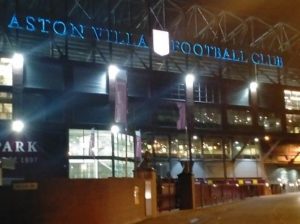 Anyway, with nothing much to play for, Villa at times played well. With everything to play for, Burnley battled like their lives depended on it. We had most of the possession, almost all the chances, and it took a quality display of defending from the visitors to prevent us from taking the lead half a dozen times in the first half. And then, in a style so absolutely classically Villa, we went a goal down on the stroke of half-time when Buendia, who I said all along should never have been playing, gave away a penalty.

Still, no matter. A couple of minutes after the restart Buendia, fully justifying his return to the starting line-up, ghosted into the penalty area and volleyed home a through ball from John McGinn.

Bertrand Traore came on for what may well be his final Villa Park appearance and almost put Villa into the lead with a well-placed header that brought about an even better save. Then at the other end Emiliano Martinez pulled off an equally brilliant save that was overshadowed immediately afterwards when a certain rebound goal was prevented by a block of McGrathesque standard from Tyrone Mings. Philippe Countinho’s arrival once again showed his brilliance as well as his recent inconsistency.

Matt Lowton came on for Burnley and went off almost immediately for a foul on Chambers and while Villa piled on the pressure in a late attempt to grab the points, a goal always looked a long way from inevitable.

The final whistle came down on another Villa Park season, at the end of a game that seemed to sum up everything that had gone before it. At times we were good, sometimes we were poor and ultimately we were let down by an inability to put away chances against sides we should be beating comfortably.

It all comes to an end on Sunday and to be honest, there’s a part of me that would happily hand over the points in return for not having to hear a single word about the whole overhyped saga.