It says something about our values when you realise there is precious little cultural activity designed for children with profound learning disabilities. Okay, relaxed performances of events targeted at wider audiences have become more commonplace, but bespoke performances are thin on the ground.

And so 2065 by Frozen Light is a welcome enterprise. Using a panoply of sensory experiences, the production aimed to engage children with profound and multiple learning disabilities through all of the senses. Plastic flowers and food stuffs emitted an aroma; a tactile keyboard allowed the audience to create sound effects; the electrical current in light bulbs responded to the pressure of a finger. Running through the show was a soundscape with bass beats and vibrations which the audience could feel as well as hear. 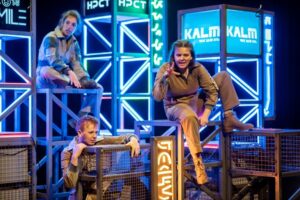 Through these effects, a story was told – a story of outsiders who exist in the shadows, waiting for change to come. The metaphor is clear: outsiders come in many forms, children with learning disabilities included. Recognition and respect of difference is the starting point for change.

There were some nice moments in the production which bore this out: the three performers interacted directly with audience members throughout, including a beautiful rendition of a song for each child, which affirmed their name and their value.

But by choosing to stay within a dramatic framework, and to use a conventional story arc, the production gave the performers limited space to respond to reactions of the children. A more flexible structure could have enabled them to go with those approaches which were working, and to give the children more time to encounter and explore the sensory input at their own pace. The point when the audience was invited to dance was one such opportunity: several children responded positively. A more elastic format would have allowed for this moment to be extended.

Props and set, which represented a city dominated by tower blocks and neon lights, were imaginative. All three performers were strong, and their singing voices quite lovely. Use of Makaton added a further means of communication with audience members.

2065 is an important venture. Let’s hope we see Frozen Light grow more confidence to play around with, or even jettison, the form if it needs to in the future.

The production’s original concept is by Lucy Garland and Amber Onat Gregory, who are also Frozen Light’s artistic directors.

Performances at MAC are part of a national tour. Further information can be found at frozenlighttheatre.