Coventry-based community theatre group Imagineer are presenting an Easter extravaganza, with free daytime activities and a brand new large-scale production in the city, supported by Coventry City of Culture 2021 and presented as part of the Birmingham 2022 Festival, running from 16th–22th April at Bishop Ullathorne School Grounds in Coventry.

Turning the Tide – An Ocean Fair and Milesians – The Coming of the Gaels will be both entertaining and thought-provoking, encouraging people of all ages to explore their connections to other people and to the planet through the journey’s that they or their ancestors have made and our collective responsibility to ocean protection and recovery.

Kathi Leahy, Artistic Director said: “Both Turning the Tide and Milesians explore our responsibility to one another and our planet, we are custodians of the land and sea for future generations and we can all do something no matter how small to ensure that future. We can’t wait for people to experience both events over Easter.”

Turning the Tide – An Ocean Fair, is a free family event, produced by Imagineer in partnership with Media Mania and the participants from Transformations and Activate and supported by Warwickshire Wildlife Trust and Canal & Rivers Trust. Taking place in a big top, activities will include artwork and soundscapes, hands on activities, spoken word, the chance to explore the water cycle, a walk-through tsunami and virtual reality headsets taking people under the sea. There are also traditional games given an environmental twist – such as Splat the Trash and Sewage Soup – plus the chance to see the artwork Jack’s Frogs which has been on display elsewhere in Coventry. 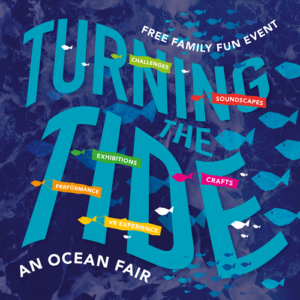 Taking place between 18th–22nd April, at the close of both the morning and the afternoon sessions, theatre company Highly Sprung will perform an outdoors production of their show CastAway which explores the throwaway society and its effects on the planet.

The show re-imagines an ancient Celtic myth in which the Milesians, or Gaels, invaded Ireland, hoping to settle there. Coming up against the god-like race of the Tuatha Dé Danann, the two peoples had to choose between war and peace.

“The story explores the notion of difference and claim and whether one people can culturally co-exist peacefully with another,” added Kathi Leahy. “It features themes of migration, cultural co-existence and healing. We are in a city with 125 different languages and so many cultural backgrounds and it’s an amazing city with so many stories and, when you look into stories, you begin to find connections and parallels with the Ocean as the great connector – so many of us or our ancestors have made a journey here across the ocean.”

The story starts at the edge of the water – a granddaughter asks her grandmother to tell her the story of their beginnings. The grandmother, performed by Caroline Parker MBE – tells the story through British Sign Language, signing the whole show as part of the cast. The audience also hear the story being told in both English and Irish via voice over/audio.

Flow: Milesians – The Coming of the Gaels is performed from Saturday 16th to Friday 22nd April, tickets cost from £5 and need to be booked. Turning the Tide – An Ocean’s Fair is open between Monday 18th and Fridaynd 22 April, half day tickets are free but need to be booked in advance. Both take place at Bishop Ullathorne School Grounds in Coventry.