“Since the first event in 1982, Lichfield Festival has brought artists and musicians of the highest calibre, and audiences local and national, to this beautiful city,” says Lichfield Festival Director, Damian Thantrey. “Alongside fabulous established and up-and-coming artists, our fortieth anniversary will feature works from the first Festival, new commissions, bespoke 1980s themed shows, music honouring the 150th anniversary of the composer Ralph Vaughan Williams and the inaugural Midlands Choir of the Year. We’re thrilled that Tony Hadley has agreed to launch the celebrations for us, and delighted also to welcome new principal Festival sponsor McArthurGlen. As always, there will be dance, drama, comedy, family fun, fireworks and free events – all the hallmarks that have made Lichfield Festival a cultural beacon for the last forty years.” 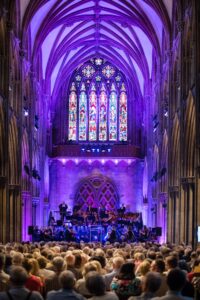 The 2022 Festival opens on Thursday 7th July with the hottest ticket in town, as former Spandau Ballet frontman and Festival patron Tony Hadley – celebrating his own fortieth anniversary tour – performs in Lichfield Cathedral.

The Cathedral is also the stunning backdrop for Ballet Cymru’s new production Dream; singer/songwriter, cellist and composer Ayanna Witter-Johnson whose music crosses many boundaries; and folk band and TikTok sensations, The Longest Johns. The Festival’s inaugural Midlands Choir of the Year Competition winners will be chosen in a Cathedral showcase of the finest Midlands-based amateur singing groups. Other headliners include stand-up comedian Zoe Lyons, host of BBC2’s Lightning and Live at the Apollo, at The Hub.

Several works from the first Festival in 1982, and music honouring Vaughan Williams’s 150th anniversary, thread through the classical music programme. A celebration centrepiece is a forty-voice choral concert in the Cathedral which includes From Silence – a new commission by composer Thomas Hyde and international best-selling author Alexander McCall Smith – and Tallis’s masterpiece, Spem in Alium. Associate Orchestra, BBC National Orchestra of Wales, play Vaughan Williams’s Fantasia on a theme of Thomas Tallis (which featured in 1982) alongside Britten and Schumann.

In the cathedral, Ronnie Scott’s Artistic director James Pearson, Lizzie Ball and an all-star band play Gershwin’s Rhapsody in Blue and other American Classics; and the National Youth Jazz Orchestra perform their Heritage programme Basie & Beyond. The Jonathan Gee Quartet jazzes up 1980s hits from Prince to Kate Bush in a bespoke Festival show and there are also gigs from BBC Young Jazz Musician 2018 Xhosa Cole (saxophone), and Middle Eastern jazz vibes from the Shirley Smart Trio.

Amongst drama and dance this year are Justin Butcher’s Walking to Jerusalem; Lichfield’s own award-winning writer and comedian Katie Arnstein with Sticky Door; The Lord Chamberlain’s Men performing Shakespeare’s As You Like It as the bard first saw it – in the open air and with an all-male cast – and Indian classical Kathak dance and music from the Jaivant Patel Dance company.

Family events include an adaptation of The Wind in the Willows; the return of the Festival Fireworks at Beacon Park on the final Saturday and a free-to-participate Day of Dance on the first Sunday. Look out too for details to come of a special children’s story-writing competition (Green Journeys), the winning entry of which will be recorded by Stephen Fry (who appeared at the 1982 Festival in his Cambridge Footlight days).

The long-running Young Artists series continues to showcase spectacular young talent, one of whom, Ben Goldscheider (horn), is now an established artist and returns to play Vaughan Williams and Brahms with the Goldfield Ensemble.

Rebecca Lee, Marketing Manager of McArthurGlen designer outlet West Midlands, Principal Festival Sponsor, said, “The West Midlands has a thriving arts and culture scene and we are delighted to work with the Lichfield Festival to support this wonderful community. The Festival is a key moment for the region, where people can come together and celebrate the extraordinary creativity in the area, and McArthurGlen West Midlands is very proud to be helping it come to life.”

The Festival is extremely grateful for all the support it receives from its corporate and individual sponsors, Lichfield City and District Councils, and Arts Council England.